The following contains a photo and brief history of a few select battle flags in the Indiana War Memorial Commission's collection. Along with these stories, is an inventory of all the flags in the collection, from the Mexican War to the Persian Gulf. Prior to World War I, every regiment received two flags, a national flag (the typical red and white stripe) and a regimental flag. You will note that some regiments 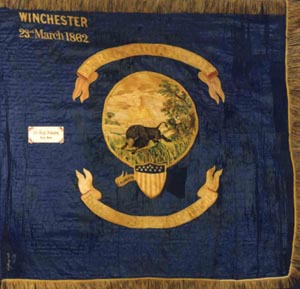 have more or less than the two issued flags. This is because some of the tattered flags were retired and replaced by new flags, and some were never replaced or turned in to the State. Photographs of many flags in the collection are available. In 1866 General Lew Wallace turned over to Governor Oliver Morton the Civil War Battle Flags under which the sons of Indiana fought and died to restore the Union. Today the Indiana Civil War Flags Commission is asking all loyal patriots to contribute to the preservation and possible restoration of these historic battle flags.

On Civil War battlefields, regimental colors or flags provided an important means for soldiers to mark the positions of their regiments and for their officers to convey instructions to the men under their command.

Each regiment had a color company or a color guard, whose assignment was to bear the colors into battle and protect them. Each member of a color guard or company was selected for this position based on his courage and steadiness under fire, by the Regimental Commanders. The flags were carried by unarmed color sergeants, and accompanied by armed color corporals, who were instructed not to engage in combat unless the flags were in immediate danger of capture, The flags became the physical symbol of a units pride and courage, a rallying point in combat and the source of many heroic deeds in their defense.

Click below to see full image or view flag inventory.