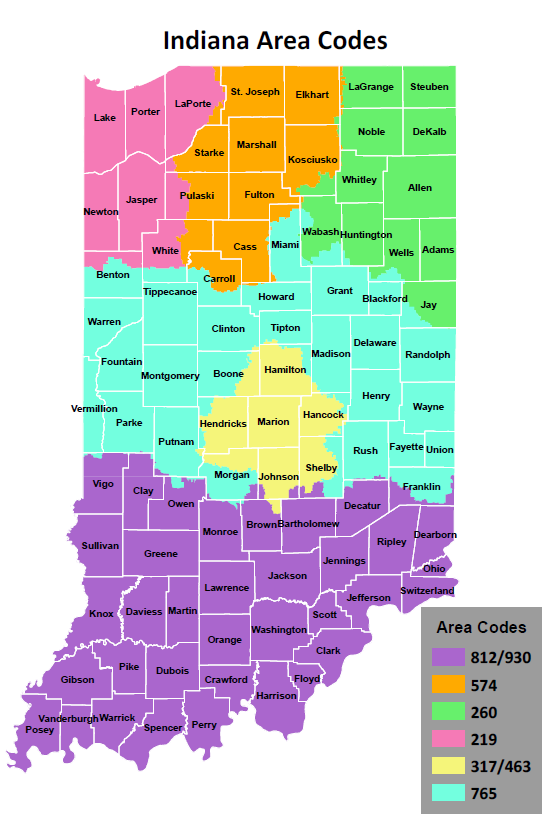 The Commission has jurisdiction over matters involving the establishment of new area codes in Indiana. An entity overseen by the FCC called the North American Numbering Plan Administrator (NANPA) monitors the status of all area codes serving 20 North American countries.  When an area code in Indiana is three years from running out of numbers (called “exhaust”), NANPA and representatives from the Indiana telecommunications industry meet to discuss the urgency for the establishment of a new area code, called area code relief, and the appropriate relief methods. NANPA then files a petition for area code relief with the Commission along with a recommended method of relief.

Ultimately, the Commission makes the final decision on which type of relief method is the most suitable. The Commission also is responsible for establishing new area code boundaries (if there is a geographic split or concentrated overlay), establishing necessary dates for the implementation of area code relief plans, and directing public education efforts regarding area code changes.

In 2014 and 2016, area code relief efforts were finalized for two areas in Indiana - 812 and 317 (Cause Nos. 44233 and 44513, respectively). In both cases, the Commission issued all services distributed overlays using area code 930 in the 812 region and 463 in the 317 region. This enabled customers and businesses to keep their existing telephone numbers. Since the changes went into effect, all parties have to dial 10 digits (3-digit area code + 7-digit telephone number) instead of 7 digits for local calls.

In both cases, the Commission approved a 13-month implementation schedule for the transition to 10-digit dialing in these areas. However, in both cases, the Commission extended the permissive dialing period to allow security companies additional time to update equipment. The Commission, the industry, and the Indiana Office of Utility Consumer Counselor provided additional customer education and outreach, such as news releases, notices, presentations at trade association meetings, and outreach to various organizations (for example, chambers of commerce, local governments, and associations). The next area code in Indiana that will need relief is not expected to exhaust until 2042.