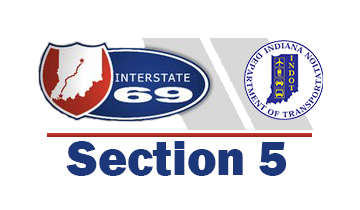 I-69 Section 5 runs from S.R. 37 south of Bloomington generally along existing S.R. 37 to Indian Creek in Morgan County and is approximately 21 miles in length.  The combined Section 5 Final Environmental Impact Statement/Record of Decision was received on August 7, 2013. Construction began in 2014 and is slated to be completed in August 2018.  The project is located in the Indiana Department of Transportation’s Seymour District and is part of the I-69 Evansville to Indianapolis corridor.