The Citizens Advisory for the Remediation of the Environment (CARE), which is made up of various area stakeholders, advises IDEM on the removal of the Beneficial Use Impairments (BUIs) impacting the Grand Calumet River Area of Concern. CARE currently holds eight workgroup meetings per year that are open for the public to observe. In addition, members of the public are invited to attend and learn more about the Grand Calumet River Area of Concern at various Public Learning Sessions. IDEM’s CARE page has additional details on these events, including schedules, agendas, and driving directions.

IDEM and the Citizens Advisory for the Remediation of the Environment (CARE) have developed an overview presentation [PDF] of the Grand Calumet River / Indiana Harbor Ship Canal Area of Concern (AOC) and the Remedial Action Plan (RAP) for the AOC. Hoosiers wishing to provide suggestions for how to improve the presentation are encouraged to contact IDEM.

The ecosystem of one of Lake Michigan’s most polluted waterways -- the Grand Calumet River and the Indiana Harbor Ship Canal -- is being restored thanks to the partnerships created by those working toward a better environmental future. The once highly polluted and damaged area is on its way to becoming truly “grand” again.

The Grand Calumet River/Indiana Harbor Ship Canal is a complex waterway located primarily within Lake County, Indiana, that has been dramatically altered [PDF] by people. It is comprised of several portions:

Prior to strict, modern environmental regulations, industries, factories, and municipal sanitary districts would often discharge chemicals and contaminants, such as polychlorinated biphenyls (PCBs), mercury, and oils, directly into the Grand Calumet River and the Indiana Harbor Ship Canal. Much of this pollution would stick to, or seep in between, the grains of clay, sand, or silt at the river bottom. The buildup of such pollution in the river sediments caused drastic harm to the ecosystem. These problems caused great concern among regulators and members of the public. In 1967, one federal official referred to the Grand Calumet River as “the filthiest stream in the world.” Bacterial water quality limits at the time were violated in 95 percent of tested water samples and an oily film covered the waters of the Indiana Ship Harbor. 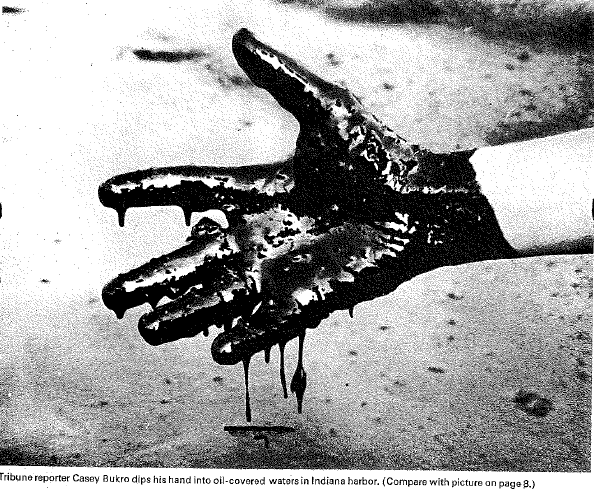 Image from 1967 Chicago Tribune Series, “Save Our Lake.”

During the late 1960s, public outcry over pollution in the Great Lakes Region led to increased focus on protecting the environment. Over the next two decades, federal and state governments adopted new environmental regulations that changed how municipalities and industries could operate. Some of these regulatory programs were:

Over time, these changes dramatically reduced the discharge of contaminants into the river. Unfortunately, even with new operational standards, the impacts of prior (legacy) contaminants had already caused great ecological harm to the river, leaving it highly impaired for human and wildlife use. Citizen’s groups, such as the Grand Calumet Taskforce, were formed to raise public awareness of, and advocate for restoration of, the polluted area.

The history of contamination and public focus on the Grand Calumet River and Indiana Harbor Ship Canal were instrumental in convincing the International Joint Commission to identify the region as a problem area within the Great Lakes as early as 1975. In the 1987 Great Lakes Water Quality Agreement, the United States and Canada created the Area of Concern Program, which was designed to give explicit consideration to the Great Lakes ecosystem as a whole. At the same time, the IJC formally recognized the region as one of the initial 42 (later 43) Great Lakes Areas of Concern (AOCs). The U.S. Environmental Protection Agency, which was tasked with overseeing the agreement in the United States, required that states develop a Remedial Action Plan (RAP) for each AOC that addresses the 14 beneficial use impairments (BUIs) affecting the ecosystem of each listed waterway.

IDEM developed a RAP for Indiana’s AOC with the aid of the Citizens Advisory for the Remediation of the Environment (CARE) Committee, a group of IDEM-designated individuals who provide input into the RAP planning process. The RAP thoroughly documents the ecological problems leading to BUIs in the AOC. It also identifies the key restoration work, such as sediment remediation and habitat restoration, needed to address these problems.

Over the past 20 years, IDEM and the CARE Committee have been planning for and implementing ecosystem projects to remove the BUIs and delist the Grand Calumet River and Indiana Harbor Ship Canal from the list of Great Lakes AOCs. With the help of the Great Lakes Restoration Initiative, the Great Lakes Legacy Act, and funding from state and local partners, great progress has been made toward remediating the river and surrounding areas.