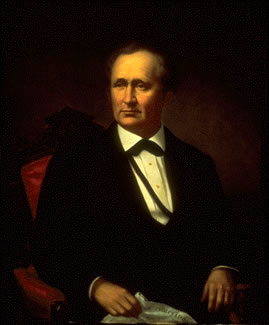 THOMAS HENDRICKS, nephew of former Governor William Hendricks, was born near Zanesville, Ohio, and moved with his family to Madison, Indiana, when he was a child. He was educated at Hanover College, graduating in 1841, and studied law in Chambersburg, Pennsylvania.

Returning to Madison, the young Democratic lawyer soon moved into political life; he served in the Indiana House of Representatives, the constitutional convention of 1850, and in Congress. From 1855 to 1859 he was commissioner of the General Land Office in Washington, and he made a national reputation as one of the leading northern Democrats in the Senate during the Civil War and Reconstruction.

After two earlier unsuccessful campaigns for governor, he was finally elected in 1873, the first Democratic governor elected in a northern state after the war. He was elected Vice-President of the United States in 1884 and died in office, less than nine months after his inauguration.

Hendricks was a popular politician and a good debater. His amiable manner led his opponents to complain that he had "not enough sincerity to be irritated by opposition." His political contribution was an essentially conservative one, attempting to fend off and hold back the revolutionary measures of the war and reconstruction periods.

T. C. Steele painted a portrait of Hendricks as one of the epochal governors chosen for the centennial celebration in 1916.