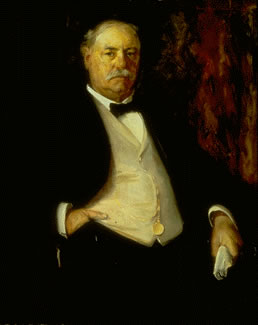 SAMUEL RALSTON was born in Ohio and moved to near Spencer, Indiana, in 1865, where his family farmed. After attending the common schools during winter months, Ralston attended normal schools in Valparaiso and Danville, and taught school for several years. Later he read law in Spencer, was admitted to the bar in 1886, and settled in Lebanon.

An active Democrat, he ran for secretary of state in 1898 and lost. He also lost the gubernatorial nomination to Thomas R. Marshall in 1908, but in 1912 he was the Democratic nominee and was elected; he defeated Albert Beveridge, Progressive, and former governor Winfield Durbin, Republican. Among many other progressive measures enacted under his leadership, the state park system was initiated and a public service commission was created to regulate utilities. Ralston, who was Beveridge's personal friend and admirer, also defeated Beveridge for the Senate in 1922.

In 1924 the Democratic presidential nomination was virtually Ralston's for the accepting after a long, complex battle in the convention, but Ralston stunned the convention by withdrawing his name. His reason, though unexplained at the time, was his precarious health.

Ralston was a man of undisputed integrity and, according to contemporaries, "there was no bluster or pretense about him."