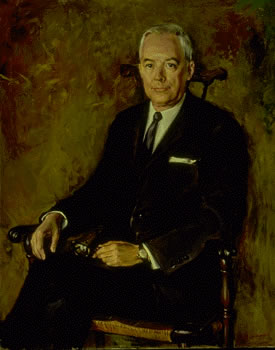 ROGER BRANIGIN was born in Franklin, Indiana, graduated from Franklin College, and received his law degree from Harvard University. He practiced law in Franklin, Louisville, Kentucky, and Lafayette before serving in World War II; after the war he returned to his law practice in Lafayette.

Following an unsuccessful run for the governorship in 1956, Branigin, a Democrat, was elected governor in 1964 by a record-breaking plurality. The poll tax and personal property tax on household goods were abolished during his administration, and the "right-to-work" law was repealed.

He was a highly entertaining public speaker, storyteller, and wit, well known for his salty language. When asked to comment on his appeal to ordinary people, Branigin, the Harvard-educated lawyer, slyly replied, "People ask me if I'm for the common man....I'm a Hoosier, a Baptist, and a Democrat, and, by God, you can't get much commoner then that."

Branigin ran as a favorite-son candidate for President in the Democratic primary in 1968, losing to Robert F. Kennedy, and returned to Lafayette to practice corporation law. He also served as a trustee of Franklin College and the Lilly Endowment and, in an appropriate expression of his interest in Indiana history, was a board member of the Indiana Historical Society.