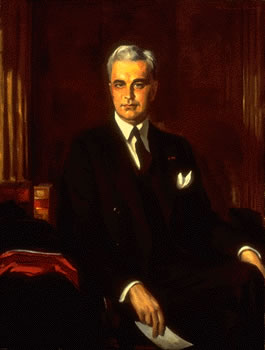 PAUL MCNUTT was born in Franklin, Indiana, and was educated in the Martinsville public schools. After graduation from Indiana University in 1913 and Harvard University Law School in 1916, McNutt practiced law briefly with his father in Martinsville. He served as an officer in the army in World War I and returned in 1919 to teach at Indiana University Law School. He was appointed dean in 1925 and held the office until he was inaugurated as Indiana's governor in 1933, the first Democrat to hold that office since Samuel Ralston.

McNutt's political career was based initially upon his American Legion career: he was Indiana commander in 1927 and national commander in 1928-1929. Elected governor in 1932, McNutt took office two months before Franklin Roosevelt was sworn in as President, and the Indiana governor's program of emergency legislation anticipated the New Deal in many particulars.

McNutt was a bold, strong leader (described as a "Hoosier Hitler" by his critics) and a highly effective governor. Centralizing the governor's administrative control, McNutt reorganized 169 state departments into eight main departments (the measure was repealed in 1941), and he instituted the "2 percent club" among state patronage workers for the support of the Democratic state party.

McNutt served from 1937 to 1939 as High Commissioner to the Philippines, from 1939 to 1945 as administrator of the Federal Security Administration, from 1942 to 1945 as chairman of the War Manpower Commission, and from 1946 to 1947 as first United States ambassador to the Philippine Republic. McNutt then retired from public service to practice law in New York, Washington, D. C., and Manila. He also served as officer for several life insurance companies and in 1950 became chairman of the board of United Artist Corporation. The strikingly handsome McNutt was a capable administrator and a canny politician. He was also, however, obviously ambitious for the presidency during the Roosevelt era and therefore destined to be disappointed.