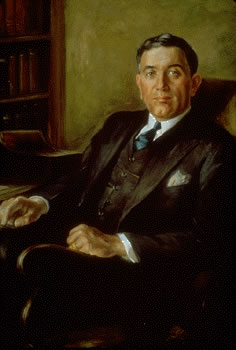 CLIFFORD TOWNSEND was born on a farm and attended school in Blackford County, Indiana. After working as a teamster and in a factory, he graduated from Marion College, Grant County, taught in the common schools, and then served for fourteen years as school superintendent for different counties. He entered politics as a representative in the Indiana house and elected lieutenant governor in 1932. Townsend's mother nominated him for governor at the 1936 Democratic state convention, and he was elected.

During World War II Townsend used his farm experience in government service, directing the Office of Agricultural War Relations, Agricultural Conservation and Adjustment Administration, and Food Production Administration. In 1943 he resigned from federal service and returned to Indiana to manage his farms in Blackford and Grant counties. Townsend was the Democratic candidate for the United States Senate in 1946 and was defeated by William E. Jenner.

An informal, folksy man, "Cliff" Townsend was credited with the safety measure of having all school buses painted yellow for instant identification.