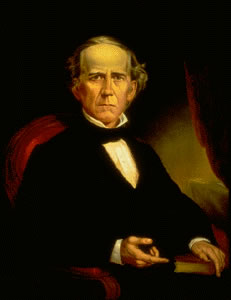 JOSEPH WRIGHT was born in Pennsylvania, the son of a brick manufacturer, and moved as a boy to Bloomington, Indiana. His father died when Joseph was fourteen years old, and Wright worked his way through Indiana Seminary (later Indiana University) as janitor, bellringer, and occasional bricklayer. He was admitted to the bar in 1829 and opened a practice in Rockville.

Wright's administration was highlighted by the adoption of a new state constitution and by the formation of a State Board of Education and a State Board of Agriculture. After his term as governor Wright served as minister to Prussia from 1857 to 1861. A firm supporter of the Union in the Civil War, he was appointed United States senator to the vacancy caused by the expulsion of Senator Jesse D. Bright, and served from February 1862, until January 1863.

A zealous Methodist and Sunday school supporter, Wright was "tall and raw-boned . . . and an effective speaker, mainly on account of his earnestness and simplicity." He composed Indiana's contribution to the words on the Washington Monument in Washington, D.C.: "Indiana knows no East, no West, no North, no South, nothing but the Union."