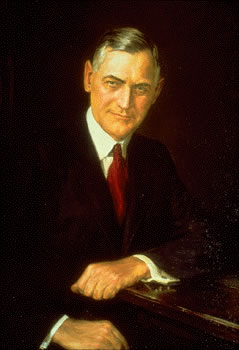 HARRY LESLIE was born of pioneer parents in West Lafayette. While a student at Purdue University Leslie played football, miraculously surviving the tragic 1903 train wreck that killed sixteen of his fellow team members in Indianapolis. After many operations to repair extensive injuries, he graduated from Purdue and received his law degree from Indiana University. Leslie opened his law office in Lafayette, became involved in Tippecanoe County politics, and was elected county treasurer in 1912 and 1914. He engaged in farming from 1914 to 1924, serving also as a bank president.

Leslie, a Republican, was a representative in the Indiana house for four years and its speaker in 1925 and 1927 before his election as governor in 1928. A blunt, simple man, Leslie had an unusual talent for friendships and as governor was known for his straightforward style of administration. His term as governor coincided with the beginning of the Great Depression, and among his efforts to ameliorate its effects a special legislative session was called in 1932 to reduce taxes and expenses of government.

Following his governorship Leslie became a founder, and eventually the president, of a life insurance company in Indianapolis. Down-to-earth and witty, Leslie boasted storytellers like George Ade and Will Rogers as good friends.