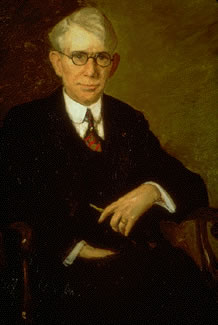 EMMETT BRANCH was a Martinsville native, the son of a rather droll couple, who named their other children Olive Branch, Leafy Branch, and Frank Oaks Branch. Emmett, the first Indiana University graduate to become governor, graduated in 1896 and went on to study law.

Branch served as an officer in the Spanish-American War and was elected to three terms in the Indiana House of Representatives, serving from 1903 to 1909. He served on the Mexican border from 1916 to 1917 and in World War I. A Republican, in 1920 he was elected lieutenant governor on the ticket with Warren T. McCray. When Governor McCray resigned, Branch succeeded him and completed that term.

Branch was essentially a small town lawyer and businessman, practicing law and running his father's grain company for most of his life in Martinsville. He was tall and thin with shaggy hair.