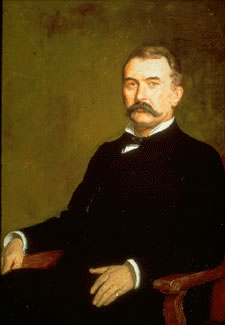 CLAUDE MATTHEWS was born in Kentucky and graduated from Centre College in Danville in 1867. At age sixteen he had fallen in love with former Governor James Whitcomb's orphaned daughter, and he married her seven years later, after he graduated from college. They settled on a farm in Vermillion County, and he became successful as a farmer and especially as a stockbreeder. He was a founder of the National Association of Breeders of Short Horn Cattle in the United States and Canada in 1872.

Matthews, a Democrat, was elected to the state legislature in 1876 and ran unsuccessfully for the state senate in 1882. He served as Indiana secretary of state from 1891 to 1893 and was elected governor in 1892. Matthews, like William Jennings Bryan a free-silver supporter, was a favorite son candidate for the presidency in 1896.

As governor, Matthews was distinguished for his vigorous efforts against the White Caps, prizefighting, and horseracing. He was tall, powerfully built, and dignified. Contemporary observers described him as "a growing man" and pointed to his rapid progress in skill as public speaker during his term as governor. He died of a stroke at age fifty-two.