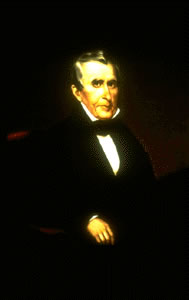 WILLIAM HENRY HARRISON was born in Virginia, the son of Benjamin Harrison, who was himself a governor of Virginia and one of the signers of the Declaration of Independence. Educated at Hampden-Sidney College, the young Harrison entered medical school but was forced to leave in 1791 when his father died. From 1792 to 1794 Harrison was Anthony Wayne's aide-de-camp in battles against the Miami Indians, and he was promoted to captain in 1797.

Harrison was appointed secretary of the Northwest Territory on June 26,1798, and in 1799 was elected a territorial delegate to Congress, where he served until May, 1800, when he was appointed governor of the Indiana Territory, an area that initially included all of the original Northwest Territory except Ohio. The twenty-seven-year-old Harrison was to serve as governor of Indiana Territory for twelve years. His dual responsibilities to secure justice for the Indians and to acquire Indian land were often contradictory, but his administration was generally able and honest. With full powers of appointment to office, Harrison was conscientious in seeking out local recommendations for appointees and encouraging the development of representative government in the new territory. During his governorship his military career was enhanced when he defeated the Prophet at Tippecanoe in 1811. He was given command of the Army of the Northwest in the fall of 1812 and resigned as governor a few months later. His forces decisively defeated the British at the Battle of the Thames in 1813.

Harrison served as representative to Congress from Ohio from 1816 to 1819, and was elected to one term in the Ohio legislature in 1819. In 1825 he was sent to the United States Senate from the same state. He served as minister to Colombia from 1828 to 1829. Harrison ran for President as a Whig in 1836 and was defeated by Martin Van Buren, but he was victorious in the 1840 race. Harrison died on April 4, 1841, one month after his inauguration, the shortest term of any President in American history.

Harrison, sometimes described as the "Washington of the West," was the grandfather of the twenty-third President of the United States, Benjamin Harrison.

T. C. Steele painted a portrait of Harrison as one of the epochal governors chosen for the centennial celebration in 1916.