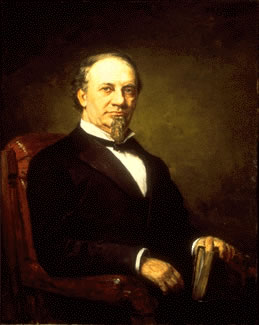 ISAAC GRAY was born in Pennsylvania in 1828 into a poor Quaker family. He was educated in common schools and settled in Union City, Indiana, as a dry goods merchant when he was twenty-seven years old. He served as a colonel in several regiments in the Union army during the Civil War and was a Republican candidate for Congress in 1866, losing the nomination to George W. Julian.

Gray was a state senator (1868-1870), then shifted parties-first to the Liberal Republican, then to the Democratic-and was elected lieutenant governor as a Democrat in 1876, serving a few months of Governor Williams' term when the governor died in office. Gray was elected governor in his own right in 1884. Forceful and ambitious, Gray was a willing candidate for either the Democratic presidential or vice-presidential nomination in 1892, losing the first to Grover Cleveland and the second to Adlai Stevenson. He was appointed minister to Mexico in 1893.

Historian Jacob P. Dunn reports that Gray played an important role in Indiana's ratification of the Fifteenth Amendment to the Constitution. According to Dunn, as Republican president pro tempore of the state senate in May 1869, Gray simply locked the door of the senate chambers and declared that a quorum was present for the vote, over the protests of Democratic members who insisted that they had already resigned their offices to prevent a quorum. This act by Gray as a Republican, Dunn suggests, essentially denied him the vice-presidency as a Democrat in 1892.