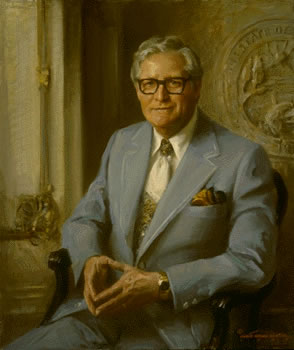 OTIS BOWEN was born near Rochester, Indiana. He graduated from Indiana University and received his M.D. from Indiana University Medical School. During World War II he served in the army medical corps. When he returned to the United States he began his private practice, acquiring a respected place in Bremen as the country doctor.

For fourteen years Bowen served as a Republican representative in the state legislature, the first ever to serve three consecutive sessions as speaker of the house. Having lost the Republican nomination for governor to Edgar Whitcomb in 1968, in 1972 Bowen was elected governor. After passage of the state constitutional amendment in 1972 allowing governors to serve consecutive four-year terms, he became in 1976 the first modern governor to succeed himself. His administration has been marked by a tax restructuring program, reducing property taxes and increasing the sales tax.

Throughout his political career "Doc" Bowen has kept a prescription pad handy, recommending remedies to cure the common cold and sore throat for both colleagues and members of the press. He has also attempted to maintain the quiet, steady patience required of a physician.

The following update to Governor Bowen's biography was prepared in October 1998 by William Du Bois Jr.

Otis Bowen was born near Richland Center in Fulton county, Indiana. After earning A.B. and M.D. degrees from Indiana University, he served in the U.S. Army Medical Corps, 1943-1946, and was with the first wave of allied troops in the invasion of Okinawa in 1945. After discharge, he established a family medical practice at Bremen, Marshall County, which was to last twenty-six years.

Dr. Bowen served as county coroner before his election to the Indiana House of Representatives in 1956. He lost a race for re-election to the House by four votes in 1958 but was elected to seven consecutive House terms beginning in 1960. He became minority leader in 1965 and speaker in 1967. He served as Speaker through four legislative sessions (1967, 1969, 1971, and 1972).

After unsuccessfully seeking the Republican nomination for Governor in 1968, Dr. Bowen was elected to that office in 1972. That year voters also ratified a Constitutional amendment allowing Governors to serve successive terms. Dr. Bowen won re-election in 1976 to become the first Governor since 1851 to serve two consecutive four-year terms. His tenure in Indiana's highest public office was marked by a major tax restructuring reducing reliance on property taxes, major improvements to state park facilities, development of a statewide emergency medical services system, and adoption of a medical malpractice law that was destined to become a national model.

After leaving office, Dr. Bowen became professor of medicine and director of undergraduate family practice education at the Indiana University Medical Center. Late in 1985, President Ronald W. Reagan nominated him as Secretary of the Department of Health & Human Services. Quickly confirmed by the U.S. Senate, he served in the cabinet until President Reagan left office on January 20, 1989. He now lives in retirement in Bremen.