When the Indiana organization met for its first meeting in the new millennium, the group decided to leave a lasting gift of hand-painted china to the state of Indiana. A place where the china could be used made the Governor's Residence a logical choice. "Wildflowers of Indiana" was selected as the pattern.

The china place settings and serving pieces were distributed to china painters from all parts of Indiana and the painters are all members of the Indiana organization of china painters through their local guilds. A different wildflower was assigned to each place setting and serving piece along with instructions to make the set have continuity. After the pieces were painted with the floral design, a committee of volunteers met over a weekend to paint the bands and apply gold. All pieces required another firing. Sixty-four porcelain artists painted a total of sixty-two different Indiana wildflowers on 242 pieces of china.

The set of china was purchased through private donations from individual china painters and member guilds of the Indiana World Organization of China Painters. 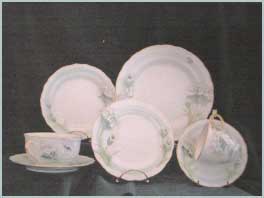 The Queen Anne's Lace gets its name form the broad, flat-topped umbels of innumerable flowers forming an intricate lace appearance.

Five anthers protrude from each flower and add to its delicate appearance. A freshly blossomed umbel has single small reddish purple

flower in its center and an older umbels folds upward from the outside to form a "bird nest." The name comes from the elaborate

headdresses and lace of fashionable seventeenth and eighteenth centuries. The roots are edible and cultivated carrot is derived from 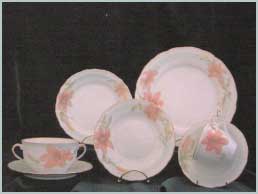 The Daylily flowers are orange with many bud clusters on long stems and basal, linear and pointed at the tips with center crease in

the leaf. The Daylily blooms for only a single day and withers at night. The upward-facing, funnel-shaped flower has three orange

sepals and three orange, wavy-margined, unspotted petals. This Eurasia plant was brought to the United States as a garden flower.

Essentially, the Daylily is sterile. It staggers the imagination to realize the acres of Daylilies growing in Indiana. All parts of this 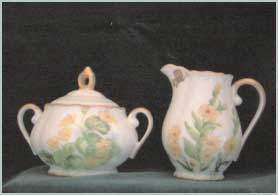 The Marsh Marigold or Cowslip has five to nine waxy yellow petal-shape sepals. The toothed leaves are heart or kidney shaped and

have a hollow stems. The leaves are waxy in appearance. 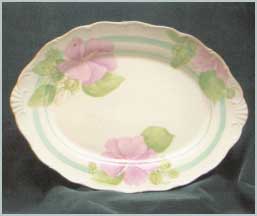 The Swamp Rose Mallow varies in color from pinkish white to almost red. The five-petaled for to seven inch bloom has a white, five headed pistil at its center and the lower half of the column is covered with yellow stamens. The sap from this plant formerly was used to make marshmallows and thus its name.