While there have been six official residences for Indiana's chief executive, only five have been occupied by a Hoosier Governor. Indiana's first Governor's Residence was located in Corydon, Indiana- the first state capital. It served as a home to Governor Jonathan Jennings and his wife, Ann, from 1816 until 1822.

In 1821, Alexander Ralston and Elias Fordham were charged with planning Indiana's new capital- Indianapolis. Ralston decided that the new Governor's Residence should be placed near the center of the city, now known as Monument Circle. This Residence was completed in 1827 at a cost of $6,500. However, Ester, wife of Governor James Brown Ray, was not happy with the results. Believing the home was too much in the public eye, she refused to live there. Subsequently, a first family never occupied the mansion. The house was auctioned off in 1857 for $667 and torn down, making way for a park that later become the city's beloved Monument Circle. In the years between 1827 and 1837, the governors selected their own place to live and received a $200 housing allowance.

In 1837, the state legislature purchased the one-year-old home of Dr. John Sanders and christened it the new Governor's Residence. It was located on the northwest corner of Illinois and Market Streets. However, the Residence at Market and Illinois proved to be damp and unhealthy, according to Governor Wallace. Governor Whitcomb blamed it for his wife's death, and Governor Morton, after a short stay, refused to live in it. The structure was sold in 1865 and eventually destroyed. The Market Tower now stands in its location.

The next official residence of the governor was located at 101 East 27th Street. (near Fall Creek Parkway and Pennsylvania Avenue) from 1919 until 1945. Built in 1908 by Henry Kahn, it was designed as an English country house by architect Herbert Foltz. This residence featured a gothic interior with beamed ceilings and Wilton carpeting. This Governor's Residence was purchased by the city in 1916 for $65,000 and was presented to the state in 1919 as a home for governors. In 1921, the General Assembly appropriated $20,000 to furnish it. The property on which the home was built stretched down Fall Creek and was near the Meridian Street Bridge. A remarkable feature of the house was a concrete foundation built below the creek bed. Another interesting aspect of the mansion was the sun porch furniture, which was made by the inmates of the Michigan City State Penitentiary. The homes proximity to Fall Creek Boulevard eventually caused problems. Governors' complained of little privacy and during the summer months dust from the boulevard rolled into the house. The Marott Hotel, located adjacent to the house, bought the property in 1930 for $86,000 and planned to establish an exclusive men's club, but costs were prohibitive. Instead, the hotel demolished to mansion in 1962 to make room for additional parking.

Meanwhile, a new Governor's Residence had already been established in 1945 at 4343 North Meridian Street. The buff brick structure remained a home to Hoosier governors until 1973. The mansion was the summer home of many prominent Indianapolis families. At the time, there were only three year-round-homes between 38th Street and Broad Ripple Canal. William N. Thompson, president of Stutz Motor Car Company, purchased the 300 X 330 foot property from Harry Lane, auditor for Indianapolis Stockyards, and built the home in 1924. The home was sold two years later to J.H. Trimble, who lived there until his death in 1937. His widow sold the house to the state in 1945 for $ 72,000. The three stories, slate roofed house was legendary for its gold bathroom fixtures and its gilt-tipped iron fence. Its 12 rooms included five bedrooms and four bathrooms. It also had an ornate mantel extending to the ceiling, an elaborate solarium, a social room extending the length of the basement, and a sprinkler system.

When the house was considered no longer suitable for Governor's Residence, it was sold at a public auction in 1973 to Robert L. Dawson, son of the former lieutenant governor. Dawson, an insurance and real estate executive, renovated the house and sold it to orthopedic surgeon, Dr. John C. Klein, in 1978.

In the two years following the 1973 auction of the property, two governors, Edgar Whitcomb and Otis Bowen, lived in Riley Towers at 200 North Alabama Street, where the state leased two twin penthouse apartments for $1, 150 per month. 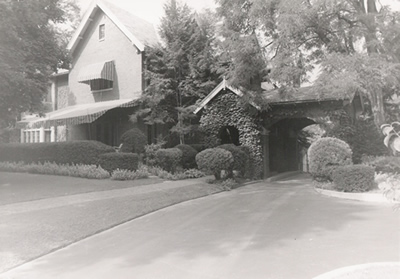 An English Tudor home, it was acquired in 1973 for approximately $ 242,000 from Indianapolis attorney C. Severin Buschman. It was built in 1928 by Scott Wadley with Rabush and hunter serving as the architects. It is typical for many large English Tudor homes built during the housing boom in 1920's along North Meridian Street. However, despite similarities architecturally to other North Meridian residences, it is structurally unique because of the concrete reinforcement of the entire building, including its attic floors.

A Timeline of 4750 North Meridian Street

2006
The Indiana Governor's Residence Commission appointed three chairpersons to coordinate the management of the renovation project. The chairpersons developed criteria for the interior designers to meet that included a high level of experience, good reputation and willingness to work in collaboration. The designers chosen were James A. Baker and Patrick Schmidt of J. Baker Interiors in Carmel, Indiana, and James T. Ruthenburg of Evaline Karges Interiors, Inc. in Evansville, Indiana. They played a critical role in fulfilling First Lady Cheri Daniels' vision of featuring Indiana artists, authors and musicians throughout the house. Interior and exterior renovations were completed in August and an open house was held for the public to view the newly renovated Governor's Residence.

2005
Governor Mitch Daniels and First Lady Cheri Daniels charged the Commission with overseeing the renovations of the Residence. The Governor's Public Building Foundation was made responsible for soliciting volunteer contributions and private funding to support the exterior and interior renovations.

2002
J.W. McQuiston Architecture and Interior Design was chosen to create a 2,300 square foot addition on the south end of the Residence, with a new meeting/dining room and an elevator serving three floors.

1999
First Lady Judy O'Bannon and the Governor's Residence Commission began work with the state to decide how to make the Residence more accessible for the disabled.

1989
Governor Evan Bayh's emphasis on physical fitness contributed to the installation of a basketball goal in the parking lot at the Residence.

1987
About 80 surplus items from the Residence were sold at an auction to raise funds for the continued redecoration of the house.

1973-74
The Governor's Residence Commission decided to acquire the six and one half acre estate at 4750 North Meridian Street to make it the new home for then- Governor and Mrs. Otis R. Bowen.