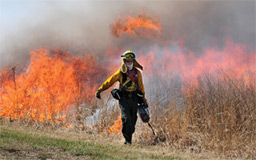 The Indiana landscape was drastically changed during the 19th century from its original condition. State parks were established and set aside to provide Hoosiers with opportunities to experience pieces of “original” Indiana. Areas of some parks still remain as they did when settlers arrived, others require active management to maintain or restore original conditions.

In state parks, prescribed fire is a tool used to mimic the natural and manmade disturbance many of these unique natural areas once depended on for survival. Reservoirs are managed to provide wildlife habitat that improves activities ranging from dove hunting to bird watching and use prescribed fire to help. The use of fire on reservoir properties helps enhance habitat for many species of wildlife. Other uses of fire include reducing potentially hazardous fuel loads and preparing food plots for wildlife.

Prescribed fires are carefully planned and executed. Certified staff with specific fire training plan, conduct, and evaluate prescribed fire in areas of forests, prairies, savanna, wetlands, and crop fields each spring and fall when meteorological conditions are optimal for safety and effectiveness.

A Long History of Natural and Human-caused Disturbance

Prior to European settlement, Indiana was draped with a complex tapestry of natural communities. Forests of many different types, marshes, prairies, and savanna are only a few examples of what covered the state. Insects, storms, 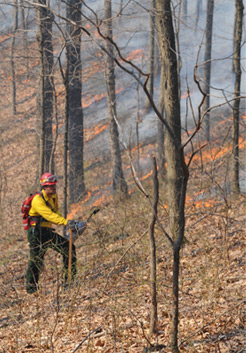 tornadoes, and fire – set both naturally and by Native Americans – created periodic disturbance events that influenced many of these natural communities. The plants and animals in such areas came to depend on this disturbance to provide important food and cover.

Many of the areas that state parks manage and protect rely on disturbance even today. One example is the oak woodland. Oak forests are declining throughout the Eastern United States due in part to a lack of forest management, the absence of once common disturbance causing insects and large animals, and decades of fire suppression. Oaks and other sun-loving grasses and flowers require sunlight to thrive and reproduce.

Without periodic disturbance that allows sunlight to fill a forest from top to bottom, more shade-tolerant trees and shrubs begin to grow in the increasing shade and eventually replace the original forest. Though this is the natural order of things, historic forests would regularly “reset” themselves after more regular disturbance. Fire will kill many of the shade-tolerant species, while oaks and other trees and shrubs can handle the high heat. Not all natural communities require the same frequency or intensity of disturbance.

Indiana state parks harbor some of the highest quality natural areas remaining in the state. From prairies and oak woodlands to barrens and marshes, the parks continue to provide an opportunity for guests to see, hear, touch, and smell many of the same things that Native Americans and early settlers did. Prescribed fire helps keep specific communities diverse, healthy, and productive.

Today’s natural areas are relatively small and widely separated throughout most of the state. With such a small area available to native plants and wildlife, it’s critical that these areas get actively managed to maximize the diversity of habitat for specific plants and animals struggling for survival in the modern landscape. In some cases, the use of prescribed fire on state parks and reservoirs contributes on a regional scale along with other agency/group efforts in the same geographic area. The result is increased vitality to regional populations of ruffed grouse, rare butterflies, and various songbirds to name a few.

Not all areas are the same, but many areas that do not burn regularly run the risk of accumulating unsafe levels of leaf litter and woody debris (fuel). Such areas benefit from periodic prescribed fires under controlled circumstances that reduce and maintain safer fuel levels over time. Should an unintended fire get started from picnic activities, careless campers, or lightning, the result is a less intense fire that is more easily and safely extinguished.

The climate and natural areas of the Midwest differ from those of other areas around the country. Different species of trees and shrubs create different fuels. The extreme wildfires you see and hear about in other places around the country are very rare in Indiana. Though wildfire occurs in Indiana, it is much less intense than in other areas. Prescribed fire is more strategic and uses weather and other elements to an advantage, reducing risks.

Fire personnel are highly trained in fire ecology, fire behavior, and wildland firefighting. Each prescribed fire is based on a burn plan that incorporates detailed management objectives, weather parameters, ignition techniques, and contingency plans. Potential impacts to wildlife such as emerging reptiles and amphibians, nesting ground birds, and unique species are also included.

State parks and reservoirs partner with many other entities in conducting prescribed fire. IDNR staff from the divisions of Forestry and Nature Preserves, The National Park Service, various universities, The Nature Conservancy, and numerous local fire departments and EMS contributes to safe and effective burns. The result is safer, more effective management and experience for those who may be called to handle emergency situations in the future.