The Baby Boom and Beyond

When WWII ended in 1945, 16 million servicemen and women returned to the United States to start a new life. To help them get started, the United States government created the G.I. Bill. The bill provided money for college and training programs. The bill also helped the service members buy houses. Nearly 7.8 million young men and women went to college under the G.I. Bill and even more purchased homes. Before the G.I. Bill, both college and home ownership had mostly been available only to the wealthy.

The huge increase in educated people had an effect on Indiana State Parks. More education generally meant higher earnings. People had money to travel and take trips to parks. Many soldiers had left farms to go to war. When they returned, many went to college and got higher-paying jobs in cities, working in offices. They began to miss nature and the outdoors, so they traveled to parks.

Soldiers returned to the United States having delayed getting married and starting families. As a result, a huge population increase called the Baby Boom occurred. A high number of families with young children increased the need for parks and schools.

A Changing Way of Life

Past generations had lived on farms or had small businesses. Leaving to take vacations was difficult. Many in the post-WWII generation had jobs that included vacation days, which allowed them the time to travel to parks.

President Dwight Eisenhower, formerly the top U.S. military leader in WWII, saw how the German highway system had helped quickly move its soldiers and equipment. Eisenhower signed a bill to create a similar highway system in the U.S. These interstates created safe, fast, paved highways. One of the many ways interstates are used is for traveling to parks. Seven interstates cross through Indiana. 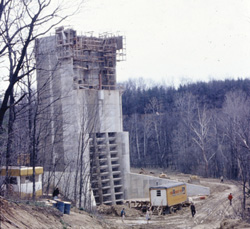 Flooding was a common occurrence along Indiana’s many rivers and streams. After a heavy rain or snowmelt, rivers would rise out of their banks. Towns and farm fields would be destroyed and lives lost.

To fix this problem, the U.S. Army Corps of Engineers built dams on Indiana’s waterways. Water behind the dam would create a lake called a reservoir. During heavy rain, the reservoir depth would increase. Gates in the dam would slowly release the extra water instead of having it go through the riverbed all at once. This prevented a flood downstream.

The lakes themselves are managed by the Corps. Activities such as hunting and timber harvesting are permitted on lake lands, but not on state park land.

Monroe Lake provides flood control and recreation, and is also the drinking-water supply for its surrounding region. A new lake can be constructed only where the landscape is steep enough to hold water like a bowl and where the bedrock stone is solid and doesn’t leak.

Merger of Parks and Reservoirs

The current form of the division is the result of a merger of the Division of State Parks and the Division of Reservoir Management. Most of the reservoirs and surrounding land, eight in all, are owned by the Corps, but their recreation and resource management is largely managed by DNR.  The merger of the two divisions took place in 1995.

Indiana States from the 1960s to Present

The late 1960s was a time of increased awareness about the environment. In Ohio, the Cuyahoga River caught fire and burned in 1969 due to industrial chemicals being dumped into it. Water and air pollution were a growing problem. Many plants and animals were disappearing due to uncontrolled development.

The environmental movement resulted in new laws that protected water, air, plants and animals. New attitudes about the environment were seen in Indiana. The Nature Preserve Act of 1967 gave permanent protection to identified natural areas. Full-time park interpreters were hired to educate people about a park’s natural and historic resources. With an understanding of the environment came the responsibility to care for it. At state parks, ecosystems were managed to keep them healthy.