Fossil beds at Falls Of The Ohio State Park.

Indiana’s limestone bedrock formed 570 to 245 million years ago. During that time, the North American continent was much farther south, closer to the equator. Temperatures were warmer and the land was covered by a shallow ocean.

This ocean was filled with clams, snails, and other animals. These animals had shells and structures that were rich in calcium. As they died, their shells formed layers on the ocean floor. As more and more layers piled up, their weight pressed down to form solid rock called limestone.

Limestone is sedimentary, which means it is formed by layers of material deposited one on top of the other over a long period. Sedimentary rock can form from layers of dirt, sand, shells, plants, or other material. The bottom layers are the oldest, while the upper ones are more recent.

Fossils form when an animal’s shell or other hard structure is buried without being broken into smaller pieces. Over time, the shell deteriorates and is replaced with limestone. During this process, the structure of the shell is broken, releasing fine pieces of a substance called calcium carbonate. The calcium carbonate forms a cement which preserves structures and prevents them from being damaged. This process forms a fossil replica or print of the shell that shows where the shell once was.

Professionals have removed numerous fossils from the limestone in state parks and all around Indiana. The public is not permitted to collect fossils from state-owned property.

Clifty Falls was created during an ice age known as the Pleistocene Epoch, which lasted from 2.6 million years ago to 11,700 years ago, when the southward flowing waters of Clifty Creek met the newly formed Ohio River in a waterfall that may once have been 200 feet high. The falls has since cut into bedrock to a point more than two miles north of its original position. The park’s 425-million-year-old shale and limestone rocks contain numerous marine fossils and are among the oldest bedrock exposures in Indiana.

These layers of shale, limestone, and fossils were created when shallow seas formed, deepened, and then receded, leaving behind marine animals buried in layers of mud of varying types that hardened into rock. Clifty Creek’s stony bed is littered with fossil remnants, including ancient corals, ancestral squids, brachiopods, and more. Fossil collecting within Clifty Falls State Park is prohibited. 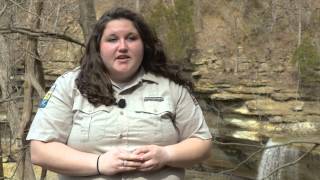 The Pleistocene started more than two and a half million years ago and ended in Indiana only 11,700 years ago. During colder ice age periods, the Earth’s overall temperature was approximately 10 degrees cooler, and more snow fell in the winter than melted in the summer. As snow piled up over thousands of years, it formed into a glacier of solid ice that flowed from Canada down over northern Indiana.

To illustrate the impact of a glacier, think of what happens if you drop a clump of wet sand on a sidewalk. It spreads out. If you drop a second clump at the same spot, the first clump spreads out farther. This is how glaciers move. As snow continued to fall in the north, the weight pushed the edges of the glacier farther south.

Today, our state shows evidence of those glaciers, especially in northeastern Indiana with the area’s many lakes, low hills, and boulders, Chain O’Lakes and Pokagon state parks hold many examples. The glacier that began melting 10,000 to 15,000 years ago was the last one of four to cover Indiana and has been named the Wisconsin glacier. The Saginaw lobe of this massive, one-mile-thick ice flow was the last to shape these two parks.

Visible features include kettle-hole lakes, kettle depressions,glacial kames, eskers, and glacial erratics. A glacial erratic is a piece of rock that is a different size or type than the others in the area. The glacier carried these erratics from other regions and deposited them in Indiana once the ice started to melt.

Publications from the Indiana Geological Survey: