Indiana’s Pioneers and the Early Days of Statehood

After the American Revolutionary War (1775-1783), the United States expanded its territory to the land west of the Appalachian Mountains. The Treaty of Paris (1783), which officially ended the war, significantly expanded U.S. boundaries. The native population did not participate in the treaty negotiations, and their interests were not considered, even though the new U.S. territory was on their traditional homelands.

In 1787, Congress passed the Northwest Ordinance, creating the Northwest Territory. This land included present-day Ohio, Indiana, Illinois, Michigan and Wisconsin. This region was home to numerous native peoples, who now were threatened by settlers moving westward.

The U.S. was a young country that had just fought a major war. The country was in debt, especially to all to the soldiers and officers who fought in the war. The government paid these former soldiers with land. 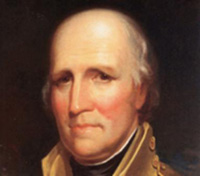 George Rogers Clark led the militia of Virginia in a campaign to capture land in Indiana and Illinois. For his service, Virginia granted Clark a large tract of land in what is now Clark County, Indiana. Clark himself settled there and parceled out the rest of the land to his former soldiers.

Clark was a skilled soldier and leader, but he struggled with finances and alcoholism after the war. His debts grew, and his creditors came after his land. Clark’s health declined and he eventually suffered a stroke. During the stroke he fell into his fireplace and burned his leg so badly it had to be amputated. He then moved in with his sister in Kentucky. He lived the rest of his life there, dying after a second stroke in 1818.

In 1803, President Thomas Jefferson arranged for the Louisiana Purchase, which netted the U.S. more than 800,000 square miles of land from a territory claimed by the French. This area stretched north from present-day Louisiana to Canada, and west from what is now Illinois, Missouri and Arkansas to what is now New Mexico, Colorado, Wyoming and Montana.

Similar to the Treaty of Paris, the Louisiana Purchase did not consider native interests. According to Native Americans, this land wasn’t France’s to sell, nor was it for the U.S. to buy.

At the end of the War of 1812, the United States controlled the Indiana Territory. The British had withdrawn and ended their alliance with American Indians. This change in power led to the opening of the land to settlement by whites. After the war, the Indiana Territory began to stabilize. This stability made land cheap and available, which encouraged settlement.

Salmon Lusk, a veteran of the War of 1812, moved from Vermont to Parke County, Indiana, in 1822. At the narrows of Sugar Creek, he established a gristmill and sawmill business. The land was rich in trees, being an old-growth forest. This forest became the legacy of the Lusk family a century later when the area became the nucleus of Turkey Run State Park.

Salmon Lusk and his family were successful in their business. Around 1840 they built a two-story brick house that still stands. Though prosperous, the Lusks were also like typical settlers. They had to work hard every day to provide food, clothing and shelter for themselves and their children.

The Pioneers at Mounds State Park 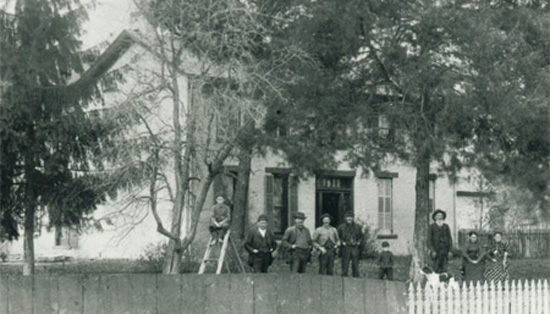 The members of the Bronnenberg family were the first people of European descent to settle on the land that is now Mounds State Park. They lived on and worked the land for several generations. They preserved the Adena-Hopewell mounds as well as the Federal-style brick home that still stands. The mounds are still here today because Frederick Bronnenberg Sr. was intrigued by them and chose not to plow them or allow people to plunder them.

Frederick Sr. came to the U.S. from Germany around 1800. He first lived in Pennsylvania, where he met and married Barbara Easter. In 1820, the Bronnenbergs headed for Illinois. They were just one of numerous families and individuals moving westward from the increasingly crowded eastern United States. Several new states had been added. Those states are now considered the Midwest.

People moved west to get inexpensive land they could farm. The surviving evidence tells of two possibilities why the Bronnenbergs stayed in Anderson, Indiana, rather than going on to Illinois as planned. Either an oxcart had broken or a child had died.

Their first house was a log cabin on land they cleared for farming. Over time, Frederick Sr. also opened a tannery, sawmill, gristmill, carding mill and distillery. The Bronnenbergs had 12 children, and nine survived. Frederick Sr. died in 1853. Upon his death, the family farm passed to his son, Frederick Jr., who along with his wife Hulda, raised six children there. Frederick Jr. built the brick house that stands today.

The Bronnenberg House was built circa 1840 using local materials, as was common in the period. The most common floorplan for a farmhouse in this period is called the I-House. The name comes from the style’s popularity in states that begin with that letter—Indiana, Illinois and Iowa.

A normal I-House was generally one room deep, two rooms wide and two stories tall. The Bronnenberg House is a typical I-House. The foundation is made from limestone. The wood was poplar and oak, and local mud was fired into the bricks. In 1870, under Frederick Jr.’s leadership, another room was added on the back of the house. Son Ransom added a second story to the addition. The farm had a number of standard outbuildings—a summer kitchen, springhouse, corncrib and barn. 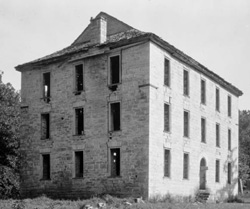 In 1865, George Donaldson, a wealthy Scotsman, purchased 200 acres near the village. The land was wooded and had many caves. Donaldson believed in protecting the natural beauty of the land. His efforts led to the area being made a nature preserve named in his honor.

In 1927, Spring Mill State Park was established and the Department of Conservation set about reconstructing the historic village. The village of today has been built to represent the historic village. Restoration of the village structures and the mill was undertaken using what could be salvaged from the original village. To fill out the village, the park purchased other 19th-century log buildings from around the state and moved them in. 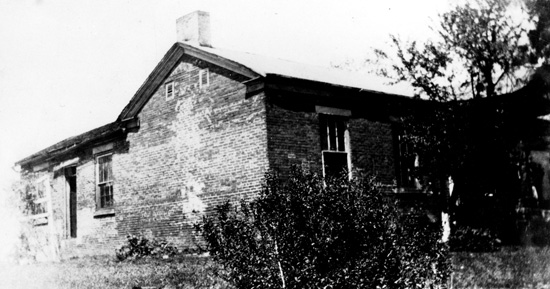 The Lincoln family came from Kentucky and was part of a community that settled in southern Indiana after statehood in 1816. The community included several farms, a general store and post office, a mill, schools and a church. Young Abraham Lincoln’s father, Thomas, built the church’s cabinets, pulpit and window casings.

Another resident of the area was James Gentry Sr. He was born in North Carolina in 1788 and previously lived in Kentucky. Gentry was the proprietor of a shop. He hired young Abraham Lincoln as a clerk. Gentry had Lincoln deliver a flatboat of goods to New Orleans. Lincoln later recalled that on this journey he saw a slave auction, which he found to be disturbing. He later said the experience late played a role in his becoming the Great Emancipator.

William Jones, another area resident, was born in 1803 in Indiana. As a young man, Jones moved to Louisville, Kentucky, where he worked for a wholesale dry goods company. In 1827, he returned to Indiana and opened a store in Spencer County. The hamlet of Jonesboro formed around Jones’ store. Jones became an important merchant because he shipped farmers’ produce to markets along the Ohio River and to New Orleans on flatboats. Abraham Lincoln worked for Jones, butchering hogs and salting and packing the meat.

Jones was an influential political figure. He supported the Whig Party. Jones shared his views with Abraham Lincoln, who also became a Whig. When the Whigs were dismantled, Lincoln and Jones joined the Republicans.

Other African-American families settled and farmed the land alongside the Huggarts. These families sent their children to nearby schools, attended area churches and worked with white neighbors. When residents of the settlement died, they were buried in Porter-Rea Cemetery, located within Potato Creek State Park. The cemetery was established in 1854 and named for two families who owned adjacent land. The cemetery was not segregated by race. Blacks and white were buried next to each other, which was unusual for the time.