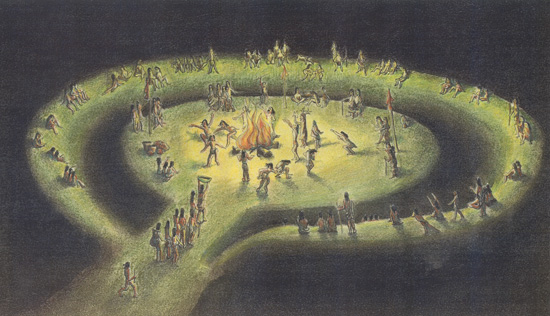 Artist's rendering of a ceremony on the Great Mound at Mounds State Park.

In the Early Woodland Period, from 1,000 to 200 B.C., there was a people group in Indiana we now call the Adena culture. The term is taken from the name of the farm of Thomas Worthington, who lived in Chillicothe, Ohio in the 19th century. Archaeologists named this civilization because they did not know what members of this group called themselves.

The Adena were not one large tribe, but likely a group of interconnected communities living mostly in Ohio and Indiana. The Adena culture is known for food cultivation, pottery, and commercial networks that covered a vast area from the Great Lakes to the Gulf of Mexico.

Over a period of 500 years, the Adena culture transformed into what we call the Hopewell tradition. Much like the Adena, the Hopewell were not one large group, but were a group of interrelated societies. Just like with the Adena, archaeologists also coined the name Hopewell.

The Hopewell’s large trade networks connected them with other cultures. Some archaeologists see the Hopewell as the pinnacle of the Adena. The Adena-Hopewell had a social hierarchy. The cultural evolution from hunter-gatherers to agriculture meant stability for the people as well as economic expansion and population growth.

Out of these cultural changes, tribes and chiefdoms emerged. No evidence exists of the Hopewell in Indiana after A.D. 500, but some scholars think that some time before European contact, the Hopewell could have become what we know now as the Miami or Shawnee.

The Woodland Period is often associated with the building of mounds, also called earthworks. Many of these mounds were built by the Adena. The mounds were used by Woodland peoples for various religious and ceremonial purposes. More than 300 of these mounds have been identified in central Indiana. All of them are on the eastern side of a river, leading scholars to think the location of a mound was deliberate.

When the mounds were used by the Adena-Hopewell, they had no trees. They removed the trees with fire to keep the view from the mound open. Each mound has four main parts: embankment, ditch, platform, and gateway. The embankment is the actual earthen mound, which creates the perimeter around the ditch. The dirt removed from the ditch was used to build the mound.

The ditch is in the middle of the enclosure and was dug first. Dirt was loaded into baskets, carried, and then dumped on the mound. The platform was located in the center of the ditch, at ground level. Finally, the gateway serves as a break in the outer embankment, creating an opening for people to enter the enclosure from the ground.

The mounds at Mounds State Park were built around 250 BCE. The Great Mound is the largest among ten found at the park. The Great Mound was most likely used for ceremonies. Although the Adena built the mound, the Hopewell used it for burials.

The names of each mound used today were not given by the Adena or the Hopewell, but were instead assigned by local scholars and officials to distinguish among extant mounds. Fiddleback Mound at Mounds State Park is in the shape of a figure 8 (much like a fiddle). Archaeologists believe that Fiddleback was a midden (i.e., a trash heap), which can provide a wealth of information about a group’s daily life. 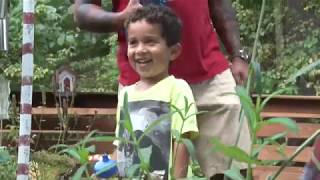 The Mississippian Culture was another mound-building civilization. This group lived in the Midwest from 800 to 1600. The Mississippians built large mounds with platforms on top. On these platforms they built houses and public buildings. The staple food for this culture was maize, also known as corn. Like the Adena-Hopewell, Mississippians had a large trade network.

The Mississippian people were agricultural, meaning they grew crops on a large scale to feed members of their society. Agriculture was the primary source of food production for Mississippian settlements. As food storage improved, these populations were able to store food year-round and save seeds for planting the next year. And, living on a river, they supplemented their diet with fish and mussels.

At some point, about 700 years ago, the Mississippians suffered a terrible drought that led to widespread loss of crops. This looming starvation drastically changed the daily life of this culture. People left their towns, farms, villages, and hamlets to form nomadic hunting and gathering bands.

Artifacts housed at Falls of the Ohio State Park

These prehistoric artifacts were used by Native Americans between 500 and 3,000 years ago.