The Civil War and Morgan’s Raid 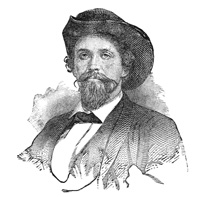 In 1863, Confederate Army General Braxton Bragg ordered John Hunt Morgan to invade the North to draw the Union Army north into Kentucky and away from Chattanooga, Tennessee. On July 8, 1863, Morgan and his unit crossed the Ohio River into Indiana. The raid lasted three weeks and extended from Indiana into Ohio.

The civilians along the route of the raid were understandably frightened by the invading force. Some of Morgan’s men raided, looted and destroyed property. People along the raiders’ route were victims of food shortages, mostly from the demand for food from Morgan’s men.

Morgan’s Raid came near the present-day site of two Indiana State Parks, O’Bannon Woods, just a few miles west of Corydon, and Versailles, just east of the town of Versailles. Corydon was the site of the Battle of Corydon in which Morgan’s Raiders fought. This clash was the only battle of the Civil War fought in Indiana. 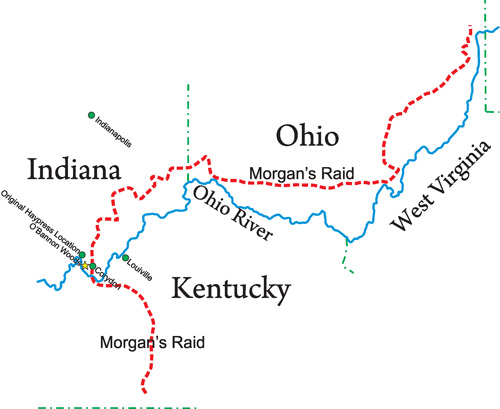 Map of Morgan's raid in southeastern Indiana during the Civil War.

Fort Benjamin Harrison was a post of the United States Army formed in 1903. The fort was established to honor the memory of former President Benjamin Harrison, who lived most of his life in Indiana. The fort was used during World War I to train combat officers, medical officers and railroad engineers. After the war ended, the Army’s Fifth Corps and 11th Infantry were garrisoned at the fort.

In 1925 the Citizens Military Training Camp opened a camp at the fort. The camp’s purpose was to train young men to be military officers, so that by the time they reached age 18 and could join the military, they were already experienced and trained in military discipline. Nationwide, the program ran until 1940, but received mixed reviews about its usefulness.

In 1933, with the country mired in the Great Depression, President Franklin Roosevelt began his New Deal program to address the devastating effects of the economic catastrophe. One of the most popular and successful programs was the Civilian Conservation Corps, which used the U.S. Army’s logistical expertise to get started.

The headquarters of the Indiana District of the CCC was housed at the fort. In 1936, CCC Company 3550 was stationed at the fort and began soil conservation and reforestation projects. As the New Deal—and the CCC, specifically— began to wind down near the end of the 1930s, rumblings of war were coming from Europe.

Fort Benjamin Harrison was again pressed into service as a military base. In 1940, the fort was an induction center for newly drafted young men. The fort was also used to train quartermasters, medical technicians and Army finance workers. In addition, the fort housed disciplinary barracks for U.S. Army soldiers and prisoner-of-war camps for German and Italian soldiers.

After World War II, the fort operated the Army Finance Center, the Adjutant General training school, and an Army Chaplain school. During the Vietnam War in the 1960s and 1970s, and the first Gulf War in the early 1990s, the fort continued to be used in those capacities. In the early 1990s, the base was chosen by the military to be closed. Some of the land was given to the State to form Fort Harrison State Park.

The Indiana Army Ammunition Plant was established in Charlestown, Indiana, along the Ohio River, by the United States Army in 1941. This plant manufactured ordnance (artillery) to support the Allies’ war effort in Europe. The construction of the plant was announced in 1940, well before the U.S. was attacked by Japan at Pearl Harbor.

The U.S. was strategically supporting the efforts of the United Kingdom to fight Germany’s advance into France and England. The production of munitions was one way to do so, but the U.S. likely anticipated it would soon get directly involved in the war. The plant eventually became the world’s largest producer of smokeless powder. At the time, the substance was the primary ingredient used to make munitions for artillery.
The Army needed a lot of people to work at such a big plant. This led to a population boom for Charlestown. In the 50 years before 1940, the population of Clark County, where Charlestown is located, grew by fewer than 800 people. From 1940 to 1950, the population increased by 17,000. In 1940 and 1941, the city tripled in size. People were coming from miles around to work at the plant.

The Indiana Army Ammunition Plant is an example of how World War II helped end the Great Depression. Many people had been unemployed for a long time. Suddenly, many jobs that supported the war effort were available.