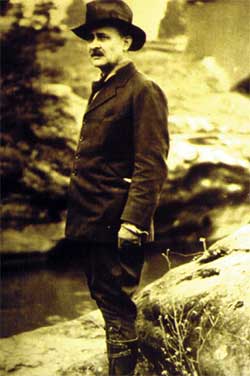 Indiana State Parks traces its history back to 1916. Colonel Richard Lieber, an Indianapolis businessman and German immigrant, recommended that a state park system be created as part of Indiana’s celebration of its centennial. Lieber became a national leader in the state parks movement and assisted other states in forming their own systems as well. He became the first Director of the Indiana Department of Conservation, serving for more than a decade.

Lieber’s strong philosophy was that users of the parks should be charged a user fee and that money from all fees should be dedicated and used to defray the operational costs. This philosophy continues to this day and Indiana is one of the leading state park systems in terms of self sufficiency. We rank third behind New Hampshire and Vermont but those states do not provide nearly the services or facilities we provide here.

Another notable aspect of Indiana’s state park system is that it is widely recognized for its quality. While many other states have far more state parks by measures such as parks/capita or parks/acre, they have often been saddled with small parks which are not efficient to manage and in most cases, should have been part of a local system. For the most part, Indiana has avoided that problem. The result is fewer parks but very high quality.

Indiana was one of the pioneers in providing naturalists to give interpretive programs that help people to enjoy and appreciate these special places. In 1923 Lucy Pitchler, described as the “little lady in tennis shoes” began taking people out on the trails of McCormicks Creek State Park, enthralling them with her knowledge and appreciation for the natural world around her. Today, Indiana is a recognized leader in this field, with total participation last year of over 888,000 students, teachers, campers and other visitors.

One of the very special things about our state park system and its rich history lies in the work of the Civilian Conservation Corps (CCC). Many of the roads, shelters, restrooms, gatehouses, and bridges etc. still in use today were built by these young men during the Great Depression. We still marvel at the craftsmanship, the simple, rustic design and the way these facilities have remained to set the tone for all that has followed.

A goal of the state parks is to give Hoosiers the ability to experience what the Indiana landscape was like prior to settlement…mature forests, wetlands and prairies. Additionally, we interpret the historical and archeological context of our state. All of this involves what is known today as resource management.

Lieber’s strong philosophy was that users of the parks should be charged a user fee and that money from all fees should be dedicated and used to defray the operational costs.

This philosophy continues to this day and Indiana is one of the leading state park systems in terms of self sufficiency.

A more modern goal has always been to have a state park within a one hour drive of every Hoosier. With the opening of Prophetstown State Park, that goal has finally been met.

Our present day Division is the result of a merger between what had been the Division of State Parks and a separate Division of Reservoir Management which had previously been responsible for the 8 Corps of Engineers reservoirs in the state and Hardy Lake, a state built project near Austin, Indiana.

The first reservoir built by the Corps was Cagles Mill in Putnam County in 1952 followed by Mansfield Reservoir (later renamed Cecil M. Harden Lake) in Parke County. In these early projects, the Corps bought the land up to a certain contour of elevation. Their primary interest was in impounding water. While in each case there was a large area purchased for public use and recreation, most of the shoreline was ringed by privately held land. With the newly filled lakes, this land was quickly developed and encroachment of the shoreline was rampant as people tried to utilize what they considered to be “their” shoreline for boating and recreational access.

With later reservoirs, Indiana was able to convince the Corps to buy enough land to prevent this problem from developing. With this larger land base, it was also possible to manage the uplands for wildlife habitat and this emphasis remains. The Division of Reservoir Management was seen within DNR as kind of a hybrid property type which blended traditional recreational uses with aspects of the state’s Fish & Wildlife Areas. These properties received more generous operational funding and became true multi-purpose properties with a philosophy of use that could be described as conservation oriented as opposed to the state parks which were clearly preservation based.

In 1995, when the two Divisions became one, it was decided that these two distinct management philosophies would remain. And they have. Hunting is only permitted on reservoir properties, on state parks it is not. Trees can be harvested for their value on reservoirs while on state parks they cannot. The merger created DNR’s largest Division by any measure.

While the former Division of Reservoir Management was considered by some to be adequately funded operationally, the Division of State Parks historically received better support in its capital budget. With the merger came increased capital funding for the reservoir properties. At the same time, the state parks benefited from the readily available resource management expertise within the reservoir staff. This was particularly true for wildlife related issues, prescribed burning and wetland restoration.

The merger has created a Division with a dual philosophy, in many cases different users (reservoirs/parks) and employees with often differing views on management. Despite the differences, the employees are much alike in their commitment to their jobs and the resources entrusted to their care.

Turnover in our Division is extremely low. Our employees often put in far more hours than they can be compensated for. The focus is on service…to the customer and to the resources they manage. Any organization is only as good as its workforce and we are blessed in that regard.

Learn more about the Cultural Resources and History of Indiana State Parks.