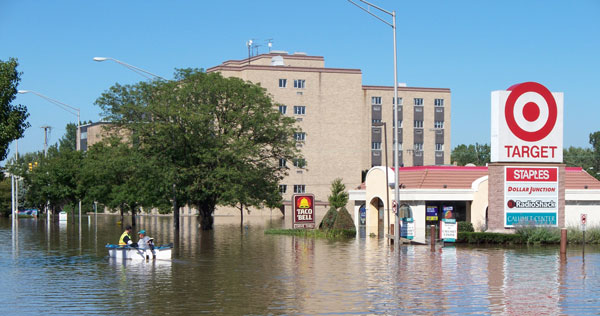 What is localized flooding?

Localized flooding often happens as a result of overloaded, blocked or inadequate stormwater drainage systems that cause sheet flow into streets and low-lying areas, ponding in yards, sewer backups and basement or first-floor flooding. It is sometimes referred to as “nuisance flooding” or “urban flooding.” Localized flooding can occur outside of Special Flood Hazard Areas (SFHAs), or A Zones, as defined on a community’s Federal Emergency Management Agency (FEMA) Flood Insurance Rate Map (FIRM). In fact, between 20 and 25 percent of all National Flood Insurance Program (NFIP) repetitive loss properties are rated as being in B, C and X zones. Homes, commercial buildings and other development in B, C and X zones rarely meet the same development standards of SFHAs and therefore are susceptible to damage from even small-scale floods.

More information from FEMA: Reducing Damage from Localized Flooding: A Guide for Communities

What are the problems associated with localized flooding?

The problems associated with localized flooding range from safety hazards and public health concerns, to property damage, to overall community impacts and costs to local governments.

As little as two feet of water can float most vehicles, and adults can be knocked down by a few inches of moving water. Standing water is a breeding ground for mosquitos that can transmit disease. Health problems like asthma, allergies and respiratory infections can develop or worsen from living in a home that developed mold and mildew after a flood. Repetitive flooding can cause anxiety for individuals and families.

Property damage can be extensive even with small amounts of water. If carpet, walls, insulation and mattresses get wet, they likely will need to be replaced. Most property owners outside of SFHAs do not have flood insurance, and damages from flooding is not covered under standard homeowner insurance policies. The cumulative damage of these floods can be significant.

The community can suffer from localized flooding because areas that are repeatedly flooded are less desirable to live and work in. Property values may decrease, and infrastructure such as sidewalks, streets, fences, and signs wear out sooner. Even temporarily flooded streets and damaged buildings can have ripple effects throughout the community and local economy.

How do I use this resource?

The Lake Michigan Coastal Program has compiled resources for northwest Indiana communities seeking to address local flooding. The resources are geared for local government staff, elected officials and commissioners, nonprofit staff, planners, developers and interested citizens. The resources are meant to serve as a starting point for understanding your community’s flood risk, tools that can be used in your community, and what groups and initiatives are tackling localized flooding issues.