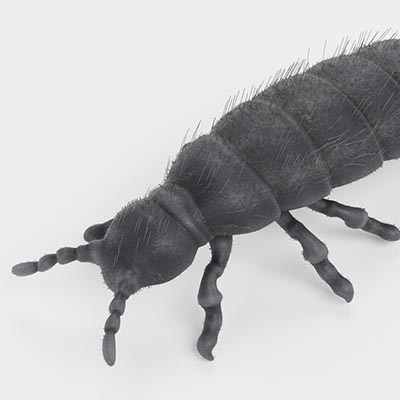 It's late winter and you're on a walk through your favorite woodland. You love winter and the freshness of good exercise on a cold day. The days are warming now though as the sun gets higher in the late winter sky and, quite frankly, you start to long for warmer days ahead and springtime around the corner. It's a quiet day, overcast, somewhat drab, but you kind of sense that you'll soon be seeing the last of winter.

Still, insects are the last things on your mind. You look down on what seems to be dirty snow and all of these little black specks. Suddenly you remember something you read on the IDNR website and you stoop down for a closer look. Just as the snow turns to cold water melting onto your knee, you notice some of the small black specks springing into the air! Yes, you’ve found ‘em! Snow fleas!

The first insects of the New Year have emerged. Snow fleas are not really fleas at all. Insect books will identify them as springtails. That name more closely describes their behavior. Tiny insects, the size of a grain of pepper, they have two little appendages that fold up under the body. With a sudden extension of those appendages, the insect flings into the air.

There are many species of snow fleas. They live in soil, leaf litter, and under the bark. They are still somewhat of a mystery. It is believed that they are mostly plant eaters, but they may scavenge on some animal matter. When conditions are just right, they emerge from damp dark quarters and cover old snow. One source says their population may number in the millions per acre! Even at those numbers, they are no problem… except for maybe the few that end up in the maple sap bucket!