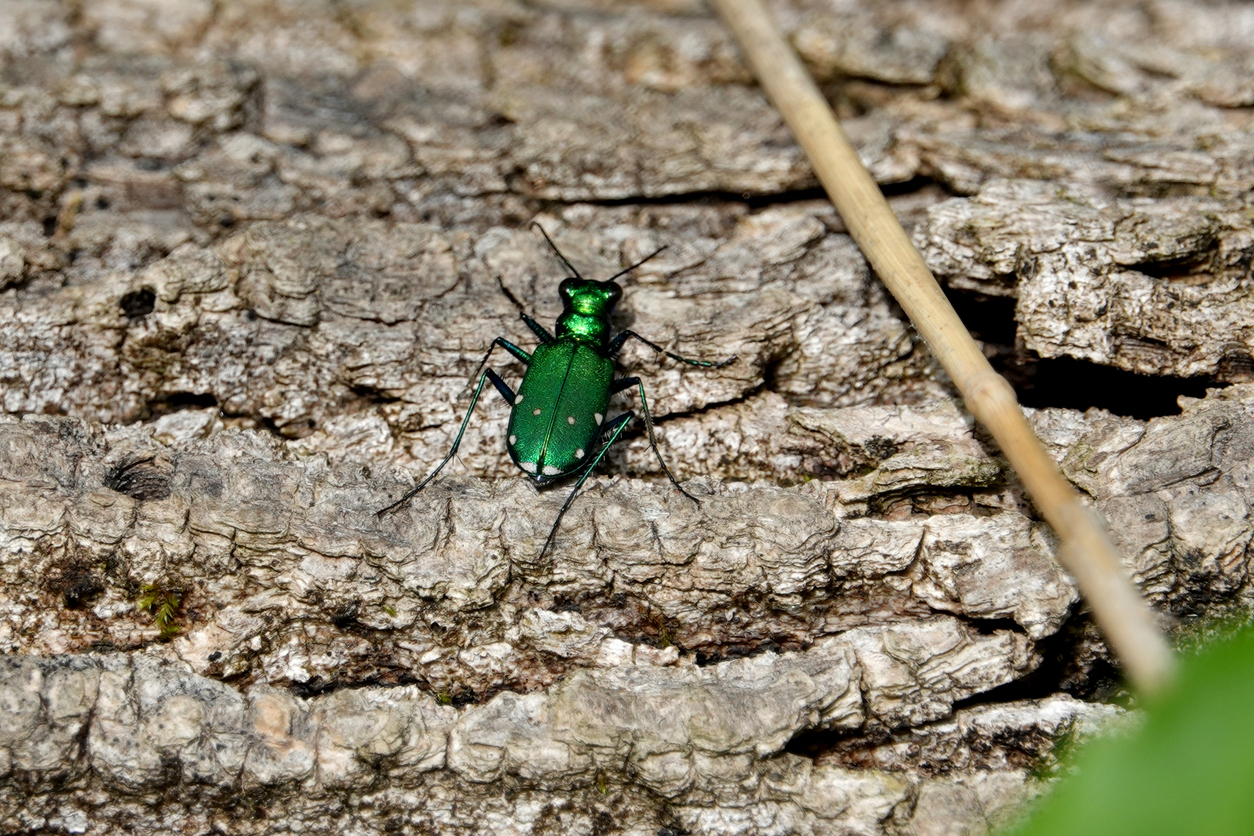 Of all the animal species on earth, approximately 40 percent of them are beetles. One of the most eye-catching of these cylindrical, skinny-legged creatures is the Six Spotted Green Tiger Beetle. This iridescent, brightly colored insect is the only tiger beetle in the North East that is shade tolerant. It lives along the paths of forested regions, instead of the open sandy areas where most tiger beetles are found.

As with many of the 147 types of tiger beetles in the United States, this species has a two-year life cycle. During this time it goes through a complete metamorphosis. This means they have four separate stages during their lifetime. The first is the egg stage. The female lays eggs in individual holes in the ground during June or early July. The egg hatches and the second stage, known as the larval stage, begins. The larva resembles a caterpillar, but with two unique characteristics. The first is the two sickle-shaped jaws protruding from its abnormally large head, which it uses to catch prey. The other is a hooked hump on its back, which prevents it from being pulled out of the ground. The entirety of the larval stage happens underground. It then reaches the third stage, the pupa a year later. The pupa begins to make its way out of the ground by digging toward the surface diagonally. The adult form of the beetle emerges within a month. The beetle is sexually mature in the spring, mates, and dies during the summer months.

The tiger beetle, no more than half an inch long, is a ferocious predator in the insect world. It is carnivorous throughout the span of its life. Even as a larva, it will wait for its prey, a juicy arthropod or a yummy spider, to meander close by. Then with strong, powerful jaws, it strikes!

The six-spotted green tiger beetle is named for its unmistakable metallic green coloration and the six yellowish spots on the back of its elytra (the hard wing covers of beetles). Interestingly enough, not all of them have six spots; in fact, some don't have any spots at all. The brilliant colors of these particular tiger beetles make them popular insects for observation and study. This is useful because they are often used as an indicator species for ecological studies. Because these beetles are limited to very specific living conditions, changes in their population can illustrate changes that may be occurring in a region they typically inhabit. Studying these critters does have some drawbacks. The six-spotted green tiger beetle is an active creature with the ability to run and fly at great speeds; this is not the case for most beetles. They can also render a painful bite on humans, so one must be careful not to make them feel threatened.

While strolling on one of the paths of your favorite Indiana state park or reservoir this spring, take time to look around your feet. See if you can find one of these colorful beetles sharing the trail with you. Take a minute to observe these ruthless, six-legged carnivores of the forest floor!