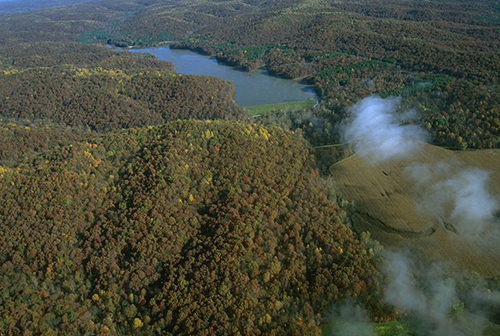 The Department of Natural Resources (DNR) has transformed nearly 160,000 acres of once neglected and abandoned farm and forest land into the healthy and diverse forests that exist in Indiana today, including the Yellowwood State Forest’s backcountry.

The periodic strategic removal of trees in managed harvests opens the forest floor to sunlight, allowing new trees to develop. Logging by single-tree selection, which targets mostly stressed, diseased and declining trees, is part of managing for these conditions in the backcountry area.

Five to seven trees per acre may be removed during this thinning. The DNR’s forestry division determines the trees to be removed dependent on each tree’s health and impact to the overall forest area.

Studies conducted by independent researchers working on State Forests show that species of conservation concern, such as the timber rattlesnake, hooded warbler, worm-eating warbler and Indiana bat can benefit from conditions created by periodic thinning of the areas like the backcountry’s current closed canopy.

Much inaccurate information has been distributed about the timber harvest in the Morgan-Monroe/Yellowwood State Forest's backcountry area. View maps of the area from 1939 and present .

There are many myths regarding the timber harvest in the Morgan-Monroe/Yellowwood State Forest's backcountry area. The following sets the record straight.

Videos about the Yellowwood timber harvest

Select a myth below to reveal the truth about timber harvesting