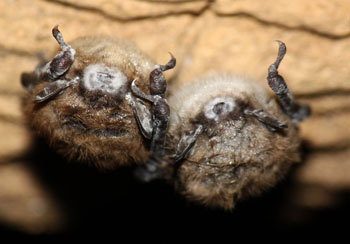 White-nose syndrome (WNS) is an infectious disease associated with a fungus (Pseudogymnoascus destructans) responsible for unprecedented levels of mortality among hibernating bats in North America. WNS is named for the white fungal growth on the skin of the muzzle, wings and ears of cave-dwelling bats during winter hibernation. The disease was first noted in New York in 2006 and has since spread to 33 states and seven Canadian provinces. The fungus that causes WNS has been found in three additional states. Twelve different bat species, including two federally endangered and one threatened, have been affected by WNS. The disease has caused the death of an estimated 5.7–6.7 million bats across eastern North America with estimates of mortality often exceeding 90% in caves that have experienced multiple years of infection.

Progression of WNS in Indiana

Impacts of WNS on Wintering Bats in Indiana

For nearly 30 years, Wildlife Diversity biologists in Indiana have conducted population counts of hibernating bats every other winter. This biennial schedule minimizes disturbance but still provides important information needed to monitor the status and health of the state’s bat populations. At present, there are 21 WNS-affected hibernacula in Indiana that have long-term winter bat population counts. The impact of WNS can be assessed by comparing the last count before the disease was detected in a particular site (2009) to its most recent count (2017-2018; no sampling was done in 2020). In these sites, the total population of all species combined has dropped from about 220,315 bats in the latest pre-WNS winter to 182,306 in the most recent post-WNS winter, a decline of about 17 percent. The impact of the disease, however, appears to differ by species. Using the same approach, biologists have tallied the following numbers for Indiana’s most common winter bat species:

big brown bats: 47% decline
from 238 in latest pre-WNS winter to 125 in most recent post-WNS winter.

For more information on WNS:

In response to a growing concern for bat populations affected by WNS in Indiana, the Indiana Department of Natural Resources (IDNR) closed public access to caves, sinkholes, tunnels and abandoned mines on IDNR-owned land in 2009. This action, made in consultation with the U.S. Fish and Wildlife Service, was a preemptive step in an attempt to slow the spread of the deadly fungus that causes WNS. The fungus can be transported from cave to cave on the boots and clothing of people, as well as by bats.

In 2014, the Indiana DNR initiated a pilot program to allow limited access to select caves at Spring Mill State Park and Cave River Valley Natural Area. The program, in partnership with the Indiana Karst Conservancy (IKC), allows for recreational caving during the summer beginning in May 2014. Groups wishing to gain access to select caves in Spring Mill State Park or Cave River Valley Natural Area must apply for a permit and comply with proper WNS decontamination protocols. Groups must register in advance through the IKC and complete an online training module that explains decontamination procedures to prevent the spread of WNS to other caves and states. To learn more about the interim cave access program click here.

Funding for WNS monitoring in Indiana is funded, in part, by citizen donations to the Indiana Nongame Wildlife Fund. To support this project and others like it, visit our donate page.