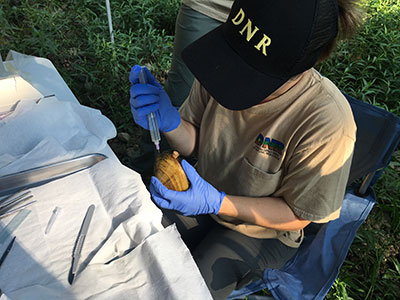 Indiana DNR’s Sick or Dead Wildlife Reporting System collects information about wildlife that appear sick or appear to have died without an apparent cause. Occasionally, biologists may use the information to collect samples. Reports may not be immediately reviewed by a biologist. Reports are added to a database that tracks trends over time and helps detect outbreaks.

However, even reports of incidents involving common species and single animals are useful for understanding baseline levels of sickness and death in wildlife populations.

The Sick or Dead Wildlife Report is not intended to collect information on roadkill or provide dead animal removal services.

The Sick or Dead Wildlife Report is not intended to provide services for orphaned and injured animals. If you have witnessed an animal that is still alive and has a traumatic physical injury, contact a permitted wildlife rehabilitator. For more information about young wildlife and what to do if you find an orphaned wild animal, visit this web page.

Report a Sick or Dead Animal