Mange is a type of skin disease caused by parasitic mites. There are different types of mange, including demodectic mange, sarcoptic mange, and notoedric mange. Each mange is caused by a different species of mite. Mites will burrow into the skin or hair follicles of their host species, depending on the type of mite.

Demodectic mange, also called demodicosis or red mange, is caused by the Demodex mite. These mites are specific to their host species, meaning that a Demodex mite that infects dogs cannot be transferred to certain wildlife, cats, or humans. 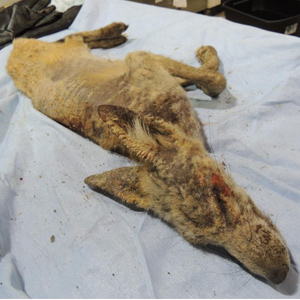 Notoedric mange, also called feline scabies, is caused by the Notoedres cati mite. Like sarcoptic mange, notoedric mange is not species dependent, is highly contagious, and infects primarily cats, but can spread to rodents, rabbits, some canids, and humans.

Sarcoptic mange is a common condition found in red foxes and coyotes and is a primary cause of mortality in red foxes. Data collected from licensed Indiana trappers typically reports evidence of mange in 3-6 percent of harvested coyotes and 2-5 percent of harvested red foxes. Mange can occur in white-tailed deer but is uncommon in Indiana. Wildlife can recover from mange, and the DNR recommends letting wildlife stay wild and allowing nature to take its course. Suspected cases of mange in wildlife can be reported using the online reporting tool at on.IN.gov/sickwildlife. If you suspect your pet has mange, contact a veterinarian.

All three types of mange described above can affect humans; however, the Demodex mite must be specific to humans to cause infection. Sarcoptic and notoedric mange are highly contagious and can be spread to humans by handling infected wildlife or touching contaminated items. To prevent transmission of mange, wear protective clothing and gloves if you must handle wildlife, and always wash your hands afterward. If you have concerns or think you may be experiencing symptoms associated with mange, contact your health care provider for assistance. More information on mange can be found at the Center for Food Security and Public Health. Information about scabies can be found at the Centers for Disease Control and Prevention.