More about the disease

Both EHD and BTV can infect deer and are both in the genus Orbivirus. EHD is not normally found in domestic animals (other than farmed white-tailed deer), but antibodies have been detected in sheep, pigs, and cattle. EHD can be found in domestic white-tailed deer. Both diseases are viral in origin and are transmitted to deer through the bite of small insects called gnats or midges. After the insect population is reduced by cold weather in the fall, the spread of the disease is reduced. Therefore, one should expect new infections to stop shortly after the first hard freeze in the fall.

Hot, dry weather with little rain, often characterized by prolonged summer-like conditions extending into the fall, may increase the occurrence and duration of an EHD outbreak. As usual water sources become scarce on the landscape, more deer use any water that is available. As deer gather around these water sources, more deer in the population may become exposed to infected biting midges, which spread the disease between deer via bites from the insects. Large deer populations can further exacerbate an outbreak as more deer frequent these watering holes.

During the hunting season, if you find a deer that has similar grooves in all its hooves, the animal may have survived an EHD infection. The grooves are a result of the deer having had a high fever and is similar to the groove in a fingernail when it grows out after being hit. Such a deer is safe to handle and eat.

EHD and BTV have been known to exist since about the 1890s. The diseases have been found in most states with the exception of those in the extreme Northeast and the Southwest. EHD has a limited number of host animals. White-tailed deer, mule deer, and pronghorn antelope have been reported to die of infections. Of the three, white-tailed deer is the most susceptible to EHD.

EHD is a naturally occurring disease in Indiana. Every year, Indiana DNR receives reports of deer potentially infected with EHD and of small, isolated outbreaks. The disease is always present at low levels. However, major outbreaks occurring in many counties are cyclic (about every five years or so).

In 2007, 2012, and 2019, Indiana has experienced major outbreaks of EHD in which affected counties suffered greater than normal numbers of sick and dead deer. For more information about the 2019 outbreak, see the map below. 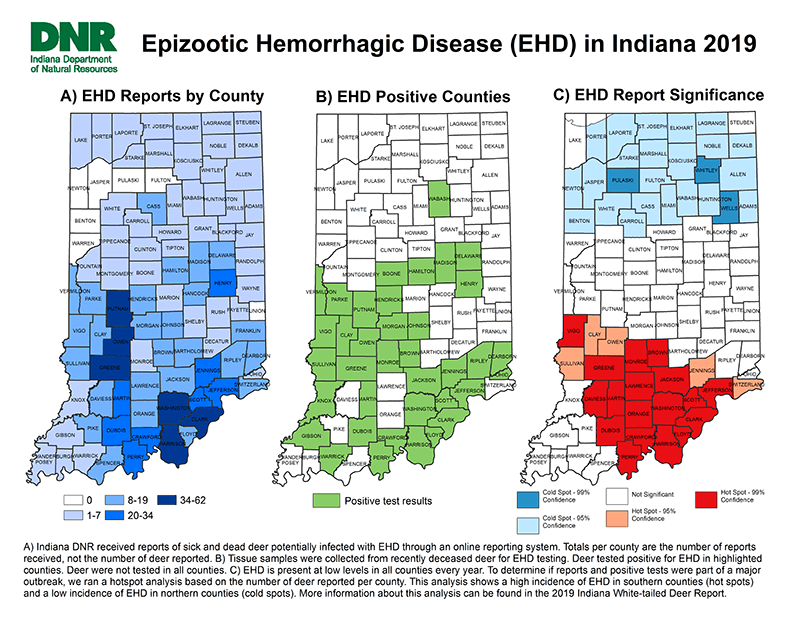 View a PDF version of this map.

EHD is an extremely virulent disease. It can be up to 90% fatal in deer showing clinical signs of the disease. The disease is characterized by the rapid onset of clinical symptoms. Some deer can survive the late stages of the disease, and not all deer that become infected will become sick enough to show clinical signs. Deer that survive the original infection may become immune to EHD and possibly BTV, and will carry antibodies in their blood. A study in the early 1970s in northern Indiana found about 20% of the deer herd had these antibodies in their blood, which indicated the herd had been exposed to EHD and survived.

EHD and BTV have similar outward signs. An increase in body temperature can cause deer to seek cool places, such as in and around water.

Outward signs of EHD include:

Blood flecks may occur in the urine and feces. In severe cases, a bloody diarrhea can develop. Deer that are infected may show lameness and a tendency to avoid direct sunlight. Many deer that die from EHD are found in or near open water.

Internal organs will have extensive bleeding throughout, most likely affecting the heart, liver, spleen, kidney, lungs, and intestinal tract. The liver, spleen, and lymph nodes may be enlarged and congested. Lesions or ulcers may occur on the lips, tongue, and cheeks.

There is no treatment for EHD once the animal shows clinical signs. There are no preventive methods that are currently being applied to wild populations of deer. According to Infectious Diseases of Wild Mammals (2001), there is no established public health risk associated with handling or eating animals infected with EHD or with exposure to EHD-infected midges.

Indiana DNR’s primary method for monitoring EHD outbreaks is through reports of individuals who suspect a sick or dead deer has EHD. These reports are collected through the Sick Animal Reporting Form. When possible, fresh dead deer may be sampled for testing by trained staff. Once a county is confirmed to have EHD, Indiana DNR uses the online reporting to monitor the spread and extent of the disease. Indiana DNR staff also maintain contact with counterparts in surrounding states to monitor the EHD status more broadly.

Because EHD is a naturally occurring disease in deer and there is no effective treatment for wild deer, Indiana DNR only monitors for the disease and then assesses the potential effect of the disease on local deer populations as the season progresses. Deer can continue to be infected by EHD for about two weeks after the first significant frost and may be found dead for another couple of weeks.

EHD is not thought to have long-term effects on the deer population size because:

When Indiana DNR reviews the effects of the harvest to set the next year’s deer harvest regulations, all known and estimated mortality is taken into consideration, including the harvest, known disease outbreaks, deer-vehicle collisions, and deer depredation permits. If a county has experienced higher than normal total mortality in the deer population, Indiana DNR can make adjustments the next year as needed.

What You Can Do

Indiana DNR needs your help monitoring EHD in Indiana. Because EHD affects deer every year on a small, localized scale, it can be difficult to determine if reports are due to a major outbreak. Indiana DNR asks that you report deer that appear to have died of EHD (e.g., found dead near water or exhibit signs listed above) via the online reporting system. This will allow Indiana DNR to develop a baseline level of EHD in the state and help determine when a major outbreak is occurring.