While there remains much conservation to be done and many species to recover, there are some recent successes. 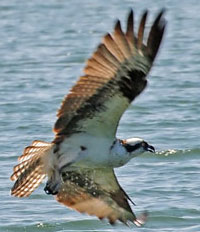 In 2018 the osprey was down listed from State Endangered to Special Concern.  Even though the Osprey, as a Special Concern species, remains a Species of Greatest Conservation Need, this down listing reflects the continued growth and expansion of Osprey in Indiana.  This is a great success story and one that speaks to the value of diverse partnerships, the Indiana Nongame Wildlife Fund and the State Wildlife Grant program. 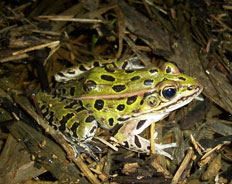 During the latter half of the 20th century Northern leopard frogs experienced considerable declines in several parts of their range, including Indiana, and in 1984 were listed as a Species of Special Concern. However, the frogs have responded well to habitat restoration and are now relatively common in the northern part of the state. As such, in 2017 the Indiana Department of Natural Resources Amphibian and Reptile Technical Advisory Committee voted unanimously to delist Northern leopard frogs. In 2019 will be formally removed as a Species of Greatest Conservation Need. 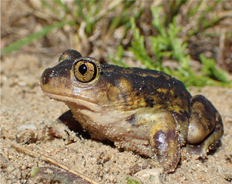 Due to survey efforts demonstrating that this species was more common than originally thought, the Eastern Spadefoot Toad was removed as a Species of Greatest Conservation Need in 2018. 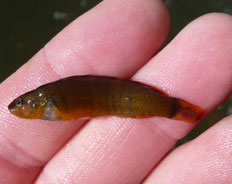 Due to this fish’s ability to burrow deeply into the gravel beds of streams, it was historically under sampled. With improved sampling techniques this fish is found to be more common than originally thought. It was removed as a Species of Greatest Conservation Need in 2018.

Photo by
US Fish & Wildlife Service

Black Bears are expanding their range in neighboring states. The fact that there have been three confirmed bears in Indiana since 2015 speaks to this expansion into Indiana. As result Black Bear was added to Indiana’s Species of Greatest Conservation Need. Previously, the Black Bear was listed as extirpated. Even though it was added to the list, it is widely considered a good add because of its return to Indiana after over a century of being extirpated.

With the help of many conservation partners (9 NGO, 7 governmental agencies, 1 private industry and over 50 private citizens), the Indiana Department of Natural Resources has purchased 10,977 acres of habitat within SWAP identified Conservation Opportunity Areas (COA) since January 1, 2015.

Indiana Division of Fish and Wildlife’s Private Lands Program utilized the State Wildlife Action Plan in the development of SAFE. SAFE enrollment started in 2008 and as of July 2018, Indiana has 58,567 acres enrolled. The purpose of the SAFE program is to:

The State Wildlife Action Plan was utilized in the development of this program by targeting areas of Indiana with the greatest potential for grassland habitat restoration and enhancement. Focal species are Northern Bobwhite, Henslow’s Sparrow, Loggerhead Shrike and Ring-necked Pheasant. In addition, this initiative will greatly benefit pollinator insects. GGS is an award winning partnership between Indiana Division of Fish and Wildlife, US Department of Agriculture, Natural Resources Foundation, private industry, other non-profit organizations and others.

Threats to species and habitats as identified in Indiana’s State Wildlife Action Plan were referenced in the development of this program. Indiana Stream and Wetland Mitigation Program is an in-lieu fee that allows IDNR to sell stream and wetland and mitigation credits for unavoidable impacts to waters of the United States. By referencing Indiana’s State Wildlife Action Plan, IDNR is able to focus credits within Conservation Opportunity Areas.