What is a pollinator? 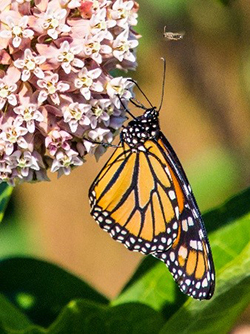 Pollinators are animals that aid in a plant’s reproductive process of pollination. These include insects and wildlife such as bees, butterflies, beetles, hummingbirds and bats. During pollination, pollen is moved from the flower’s male part (stamen) to the female part (stigma) of the same or another flower. This fertilization starts the production of fruits and seeds. Some flowers rely on the wind to move pollen, others rely on animals. The pollinators visit flowers in search of food such as nectar and pollen. Many native plants, agricultural fruit and vegetable crops either require pollination or are much less productive without it.

Why are pollinators important

Pollinators are responsible for up to 35 percent of global crop production, which equates to more than one out of three bites of food people eat. The need for pollinators increases as the human population grows, but many pollinator populations are declining from habitat loss, nutritional deficiency, parasites, pathogens, chemical exposure and extreme weather. Insect pollinators play a role in the natural food web as prey for many bird and wildlife species, including rare, threatened and endangered species.