Groundhogs or woodchucks (Marmota monax) are a rodent that is in the same family as squirrels. They are the largest member of the squirrel family and common throughout Indiana. 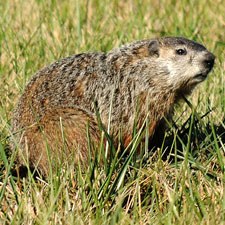 Woodchucks are found statewide in a variety of habitats. They prefer meadows, pastures, crop fields and yards that are close to a woods edge. They are common in brushy or weedy areas along fence rows or road right-of-ways. 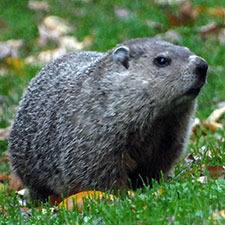 Winter burrows are usually in wooded areas, whereas summer burrows are found near grassy or agricultural fields where food is available, sometimes under a barn. It is common for a woodchuck to have more than one summer burrow and make multiple entrances. Woodchucks are territorial, except during the breeding season, and will defend their burrows against intruders.

Woodchucks breed in late February or March and usually not until the animal is close to two years old. The gestation period is 31-32 days. Four to five young are born in April or May. A woodchuck will give birth to only one litter per year. The young will start to find their own territory when they are just a few months old.

Groundhogs are omnivores, with the majority of the diet being plant matter.

Occasionally they will eat:

An adult woodchuck can eat more than a pound of vegetation each day.

To prevent a groundhog from eating your shrubs or plants in your garden, install a fence around it that is at least 3 feet high, made of heavy poultry wire or 2-inch mesh woven wire, and staked at a 45-degree angle. You must also bury the wire 10-12 inches below ground to prevent them from digging underneath. An electric wire fence placed 4-5 inches above ground outside the fence will also discourage climbing and digging underneath the fence.

Scarecrows can provide temporary relief, but they must be moved around regularly and in conjunction with a high amount of dog or human presence to scare them away.

Groundhogs can be live-trapped using a cage trap baited with apples. You do not need a permit to trap a woodchuck, but you must have permission from a landowner or property manager to release a woodchuck on their property.

Shooting, where legal, can also be an effective method or reducing or maintaining a low population of groundhogs. Groundhogs can be captured or killed year-round without a permit or hunting or trapping license from the DNR, and there are no limits to the number that can be taken.