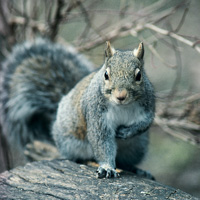 Gray squirrels (Sciurus carolinensis) are the most abundant tree squirrel in North America. Their pelage, or fur, is a grizzled mixture of white, black and yellow hairs on the head, ears, sides, back and tail. Their underparts are predominantly white. Their tails serve balance and communication with other squirrels. Compared to fox squirrels, they appear more alert and active.

They typically are most active during the early morning and late evening hours with activity lowest through mid-day when they spend their time resting, or loafing. Their bark, a squack-squack sound, is accompanied by vigorous tail jerks that announce danger.

Adult females have between 1 and 2 litters per year, which will depend on the condition of the female. Breeding can occur as early as January and young develop for approximately 44 days from breeding to birth. Females begin to have letters in February or March, and may have a second litter in mid-summer depending on food availability. Litters average 2 or 3 young, and tend to have high survival. March litters are usually born in tree cavities while summer litters are produced in leaf nests placed in a tree crotch, or high branches. Nests are constructed of twigs and may be lined with soft bark, leaves, moss, lichens, pine needles, and/or fur. The young are born blind and naked. Eyes do not open until they are nearly 5 weeks old. Males do not help rear young and will mate with as many females as possible. Family groups of closely related individuals may form and winter in dens (tree cavities).

Gray squirrels may eat green field corn; but, their principal diet is made up of hard mast, wild berries, and fruits. Gray squirrels do occasionally eat fungi, bird eggs or nestlings, and insects. Late summer foods are wild cherries, hickory nuts, oak acorns, tulip poplar cones, beechnuts, dogwood and sassafras berries.  Squirrels do not hibernate; but, do become less active to reduce energy demands in the winter. When they are active during the winter, they spend most of their time foraging on the ground floor for previously buried acorns and nuts. We believe squirrels find buried nuts, or caches, by sense of smell, not memory. From February to May, gray squirrels will forage on early tree buds and spring seeds until spring greens emerge.

Gray squirrels formerly occupied all woodlands throughout the state. Timber removal resulted in their decline in northern parts of Indiana; however, fox squirrels were likely more common to the oak savannahs of the NW region of Indiana prior to settlement.  Annual abundance largely depends on food availability during the previous autumn, particularly hard mast production (oak and hickory nuts).

Gray squirrels are notorious for raiding birdfeeders and gorging themselves. “Squirrel-proof” feeders are available, and some are affective.

Resident landowners and tenants can live-trap a gray squirrel that is causing damage on their own property without a permit from the DNR. The gray squirrel must be euthanized or released within the county of capture on property in which you have permission. In order to prevent the spread of disease, the DNR encourages homeowners to safely and humanely euthanize the gray squirrels, if possible. Live-traps can be purchased from hardware stores and garden centers. If you do not want to trap the squirrel yourself, contact a licensed nuisance wild animal control operator.

Gray squirrels have been known to strip the bark from the upper branches of trees. This behavior typically occurs in early spring and early fall in response to their increased need for sodium. Sap, flowing up from the roots into the branches of trees in the spring and energy rich sap being produced in the fall, contain higher concentrations of sodium. Squirrels will peel back the thinner, more pliable bark, on the younger tree branches to get at the sodium-rich sap. Certain glues used in making plywood, as well as chemicals found in electric wire insulation, may also contain sodium and lead to squirrels chewing on these objects. Since the damage is directly related to squirrels needing more sodium (salt), the problem can often be mitigated by making alternative sources of salt more readily available. Small mineral/salt blocks or rings can be purchased from local pet supply stores and placed at the base of the trees being damaged or in the crooks of easily-accessible branches. Soak wooden stakes in salt water for 24 hours and then either place the stakes in the ground around the affected trees or wire them to the tree trunks.