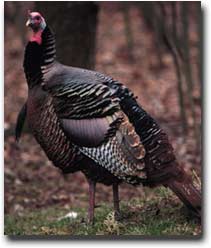 Wild turkeys were extirpated from Indiana around the 1900s due to loss of forested habitats and unregulated, subsistence hunting for food. As late as 1945, it appeared that they might be a vanishing species in the United States. As marginal farmland returned to forest and conservation practices were applied to our plundered land, the state was set for turkey revival. Where wild turkeys were extirpated, state wildlife agencies were able to successfully restore the appropriate subspecies by solely using wild trapped turkeys from residual wild populations and transplanting them to areas of suitable habitat.

Additionally, modern day hunting regulations were developed to allow sustainable annual harvests while providing protection to the long-term existence of wild turkeys. Wildlife habitat management projects, ensuring the seasonal life needs of wild turkeys, have also contributed to their successful restoration. The future of wild turkey will be directly tied to the connectivity of forest cover and travel corridors, the presence of quality nesting and brood rearing habitat, climatic factors, and how well they can adapt to increasing human development that often reduces the habitat quality of areas for wild turkeys.

All domestic turkeys are descendants of those taken from the wild in North and Central America. Genuine wild turkeys resemble their tame relatives, but generations of escaping meat eaters has resulted in extreme wariness and preference for rapid take off and flights of more than a mile.

The wild turkey's naked head and neck have a bluish cast, while the overall appearance is glossy black with a metallic sheen. Hens are smaller than gobblers, less lustrous with a more cryptic coloration to blend into the background, and do not generally have the bristly black beard hanging from the center of the breast.

Late winter finds flocks dividing into smaller groups with the hens in one flock, young males in another, and old gobblers in  different groups.  In the spring, the males select and defend a territory against all competitors for their harem of hens. Each morning, they call to and court as many hens as they can lure away from neighboring gobblers. These displays of males strutting their grand tail fans, courtship movement, and occasional lusty fights are performed from February through May.

Hens slip off from their companions and throw together a careless but well-screened nest located on the ground.  It is often concealed by brush and low vegetation. Nests may contain seven to 20 eggs, but the average is about 12. The hen seldom leaves the nest once  the 28 day  incubation period starts. Pink/brown poults emerge from the eggs, leave the nest very shortly, and immediately begin feeding on invertebrates (insects, spiders, etc) as they walk through the cover of ground vegetation.   Poults  begin awkward small flights at about two weeks of age. The family group of a hen and her poults is called a brood.  The brood  feeds, roosts and loafs together until large flocks congregate in late autumn.

Invertebrates  provide a high protein  diet for fast-growing poults. This is their almost exclusive for the first 4-6 weeks of life.  As poults mature, they begin to shift more toward a mix diet that incudes wild fruits, acorns,  herbaceous plant materials (green leaves, roots, tubers),  and seeds. Fall and winter flocks of wild turkeys continue to feed on wild fruits, acorns and beechnuts (referred to as mast), cold tolerant herbaceous greens,  and domestic grains (corn, soybeans, and wheat) left on the ground after agricultural harvests.

A spring hunting season for turkeys has been in place since 1970. The bag limit is one male or bearded turkey. Since the early 2000s, annual spring harvests have exceeded 10,000 birds with  50,000 to 60,000 hunters participating with an average hunting success of around 20% (1 in 5 hunters) . A conservative fall season was implemented in 2005 with a single bird of either sex, with considerable fewer hunters participating and  annual fall harvests averaging less than 700 birds. Estimated hunter success around 5-8% in recent years.

Turkey nests are especially vulnerable to ground predators during the nesting period with at least 30% of the first nesting attempts lost to predators.  Young poults are extremely fragile with normally around 505 or more lost in the first two weeks of life to inclement weather or  a wide variety of predators. Larger adults are not as susceptible to predation and generally live for several years.

The Division of Fish and Wildlife has followed the management plan listed below: