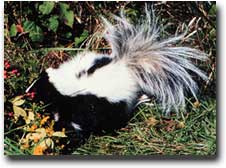 The striped skunk (Mephitis mephitis) is a distinctive member of Indiana’s wildlife community. Their conspicuous black and white coloration warns of their best defense, the strong-smelling musk they spray to ward off threats. Skunks have poor eyesight and mostly hunt by nose and hearing, so it can be easy to startle one. However, often skunks give warning before spraying by stomping their feet and arching their back as a caution.

Striped skunks have the largest range of the five skunk species in the U.S. They exist in every state except Alaska and Hawaii. The striped skunk lives in every Indiana county. Skunks prosper in a variety of habitats including wetland, forest and agricultural edge. Striped skunks are also common in urban areas. Skunks become inactive during the coldest periods, but they do not hibernate and may be active year-round.

Skunks mate during late February or early March, with four to seven mouse-sized young born 62 days later in May. They may have multiple mates and males do not help raise young. Skunks use dens to give birth and raise young. They either dig their own or enlarge an existing den, such as a groundhog burrow. Skunks are weaned after two months and the young skunks follow their mother for the first few months before going off on their own in fall. Baby skunks begin producing their recognizable musk at 8 days old.

Skunks are an opportunistic omnivore, eating just about any vegetable, animal or insect that it can get its paws on. However, much of their food consists of invertebrates, and they may make distinctive conical holes in a mowed yard to get at worms or grubs. Primary foods include

Being generalists, habitat management for skunks is not necessary. Keeping pesticide levels moderate can reduce the chance of incidental poisoning of skunks through the eating of infected mice and invertebrates. There is a regulated hunting and trapping season for skunks that avoids the breeding season when kits are young.

Resident landowners and tenants can trap a skunk that is causing damage on their own property without a permit from the DNR. The skunk must be euthanized or released within the county of capture on private property on which you have permission to release the skunk. In order to prevent the spread of disease, the DNR encourages homeowners to safely and humanely euthanize skunks, if possible. If you do not want to trap the skunk yourself, contact a licensed nuisance wild animal control operator.

Occasional skunk sightings around neighborhoods should not be cause for alarm. Skunks are generally not aggressive and will only spray if they feel cornered or attacked. Monitoring pets while outside, keeping cats indoors and dog on leashes are critical to preventing unwanted encounters with all wildlife, including striped skunks. Considerations to discourage skunks include: