Snake fungal disease (SFD), caused by the fungus Ophidiomyces ophiodiicola, is an emerging pathogen of snakes identified in more than 15 genera of captive and free-ranging snakes in 21 states. 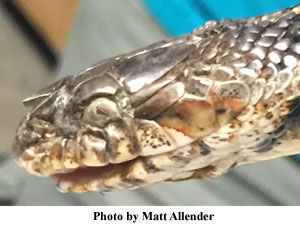 SFD is not considered a risk to people.

Some infected snakes show no symptoms. Others develop facial swelling and disfigurement, skin and scale lesions and internal lesions. For some snakes, the disease is fatal.

The fungus can persist in the soil. The route of transmission is unknown, but may occur through contact with soil, other infected snakes, or from mother to offspring.

Researchers from the University of Illinois first identified SFD in Indiana in late 2017 during a surveillance project for the disease.

The surveillance project was funded by the Indiana Department of Natural Resources State Wildlife Grant T7R22.

Field work will resume in spring 2018.

Why monitoring SFD is important

Snakes are important predators and play a critical role in maintaining a balanced ecosystem. Having healthy snake populations in Indiana is necessary to keep rodent populations in check.

Documenting the distribution of this disease will help us develop conservation and management plans.

Snake fungal disease may cause high mortality rates in eastern massasauga rattlesnakes (Sistrurus catenatus), a federally threatened and state-endangered species in parts of northern Indiana. The potential long-term effect on populations of massasaugas and other snakes remains uncertain.

How You Can Help