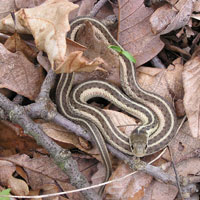 Snakes are misunderstood animals that serve as an important component of many types of ecosystems.

All snakes are reptiles. Reptiles are ectothermic, which means they obtain body heat from their surroundings (also called cold-blooded). They bask in the sun to warm and seek shade to cool. They tend to be more active during the day in spring and fall, and more active early morning and evening during the heat of summer.

Many people have a fear of snakes and snakebites. Most snakebites are a result of someone trying to move a snake by accidentally stepping on one. Bites from venomous snakes are very rare in Indiana.

Indiana is home to 32 native snake species of which only four are venomous. 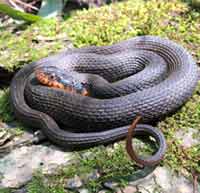 Snakes mate in the spring after they emerge from hibernation or in late-summer before returning to hibernation. Snakes can produce offspring in three ways:

In both viviparous and ovoviviparous species, the eggs lack a true shell. Instead, the young develop within a sac-like membrane inside the mother. Young of oviparous species have a leathery, flexible shell. Females will lay eggs in leaf litter, rotten logs and mulch piles, or underground.

The diet of snakes can vary widely depending on availability and location, but all snakes are carnivores. Here are some common items in snake’s diets: 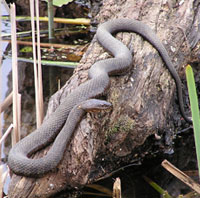 Snakes swallow their food whole and have flexible jaws and joints in their skulls, which allow them to consume larger prey.

What eats a snake?

Snakes are preyed upon by many animals including:

Why are Snakes Important for Ecosystems?

The biggest threats to snake populations are habitat loss, persecution by humans, overuse of pesticides, and collection of wild snakes by hobbyists and reptile dealers.

REMEMBER: Most snakes are killed out of fear.

If you leave a snake alone, it will leave you alone. When a snake bites a person, it does so in self-defense. 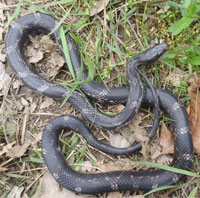