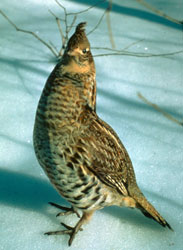 Ruffed grouse (Bonasa umbellus) are found in some of the large forested areas of south-central Indiana. These game birds are about three times the size of quail, and when flushed from cover they resound with a volume equal to their size. Ruffed grouse depend on young forests of seedling/sapling/pole size hardwoods. Historically, this habitat formed from natural disturbances such as tornadoes, fire storms, and insect outbreaks, or occurred in transitional zones between grasslands and forests.

Grouse are native to Indiana and belong to a family of birds containing 18 species. The first settlers found grouse throughout the state, but as years passed, loss of habitat caused a rapid decrease in the population. During the Great Depression, however, farmers abandoned marginal ground, leading to a period of reforestation. Grouse populations expanded again, both naturally and through restoration efforts that included trapping and relocating birds. By 1983 the species’ range included 41 counties, the widest distribution since 1856. After peaking in the 1980s, populations declined. A reassessment of the ruffed grouse distribution and relative conservation status was conducted in 2008. Ruffed grouse appeared extirpated from 15 counties and this extirpation trend is likely to exceed 25 counties within a few years if no major forest disturbance occurs. The plight of ruffed grouse reflects the declining early successional habitat base, the loss of young and dense hardwood forests. This is negatively impacting a wide array of wildlife species.

Ruffed grouse, unlike quail, do not remain paired during the breeding season. Ruffed grouse are polygamous breeders; the male and female grouse meet only momentarily for breeding. After breeding, the hen moves on to begin nesting while the male continues to drum and breed with additional females. The nest is likely to be located in a pan shaped depression at the base of a tree or in a small clump of brush. An average of 11 antique white eggs are laid in April and hatch in 24 days.

Setting hens have a near prefect camouflage and will sit tight until approached within a few feet. When flushed from her nest, she will usually return, but the eggs may chill if disturbance is prolonged or frequent. Human scent will also lead predators to the nest. Chicks leave soon after hatching and can fly at three weeks of age. At 12 weeks, they are fully grown and ready to go their own way.

Grouse eat a wide variety of foods from tree buds to insects. Seldom would there be a shortage of food for grouse. Green plant material is readily taken from April through September. The most common foods are wild grapes, legume seeds, greenbrier berries, Christmas fern fronds, cinquefoil leaves, dogwood berries, acorns, ironwood catkins, hazelnuts, green leaves and tree buds. Grouse usually feed in early morning and then loaf in protected areas such as pine groves.

Hunting restrictions were first enacted in 1890 limiting the open season from Oct. 15 to Dec. 20, and in 1937 the season was completely closed. Studies of grouse were first initiated in 1951 to census the population and determine their range. Nesting and brood observations were started in 1952 followed by roadside drumming counts in 1953. Wild trapped grouse from Wisconsin were purchased and released in suitable but unpopulated areas in 1952 and 1954. These releases were not successful in building a population possibly because they were the wrong subspecies adapted to southern Indiana.

Starting in 1963, wild-trapped grouse from the existing grouse range in Indiana were released in unoccupied areas in southern Indiana, and in 1965 the first hunting season in 28 years was opened  in Monroe, Morgan, Brown, Jackson, Bartholomew and Lawrence counties. In the late 1970’s and early 1980’s sustainable fall harvests were estimated to range from 10,000 to 15,000 grouse annually. Populations of ruffed grouse began to decline rapidly as young forest habitats disappeared replaced by maturing, older forests across the Indiana landscape. As grouse populations declined, grouse hunting opportunities were progressively reduced by the early 2000’s and the grouse season was finally closed in 2015.

In December 2020, ruffed grouse were added to the “State Endangered” list and are now estimated to exist at extremely low populations levels in about 12 counties.