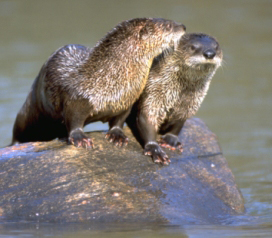 River otters (Lontra canadensis) are now found throughout most of Indiana, thanks to efforts of the DNR and its partners. In 1995, the DNR began a reintroduction program aimed at re-establishing a healthy otter population in several watersheds of northern and southern Indiana. After five years of reintroductions, the otter population began to expand through natural reproduction. The otter was removed from the state-endangered species list in 2005. Since that time, otters have been documented in more than 90 percent of Indiana counties, far surpassing reintroduction goals. The population continues to expand.

A total of 303 river otters were released in northern and southern Indiana between 1995 and 1999.

The reintroduction went so well that the river otter was removed from the state-endangered list in 2005. River otter reports have been documented in most counties in Indiana and river otter will likely be statewide, though in some places at low densities in the next several years.  Each year, DNR staff collect samples from river otter carcasses for population monitoring.

River otters are polygynous (have several mates). Most river otters will start reproducing at 2 years old. Otters typically breed from December to April and gestation is 61–63 days. Otters also delay implantation at least 8 months, meaning birth may not occur until 10 to 12 months after copulation. Litter size is typically one to three kits, however they can range up to five. The female otter raises the young without aid from the adult males. Young are born between February–April and can leave the den within eight weeks of birth. 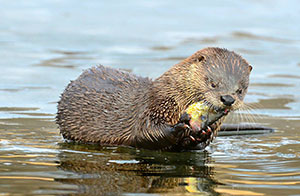 River otters spend  most of their lives in water, which reflects in their diet.

Though primarily  carnivores, river otters have been documented eating fruit on rare occasions.

River otters can cause damage, especially to small fish ponds or fish hatcheries. If a landowner has otter damage occurring during trapping season, their best option is to allow a licensed trapper property access to try to alleviate the damage. Outside of the trapping season, landowners can contact the DNR to obtain a nuisance wild animal control permit. Otter damage in ponds can be reduced by providing adequate structure to give fish ample places to hide from predators like otter. Electric or welded-wire fencing can also be effective, depending on the size of the pond or hatchery.

Indiana residents having conflicts with river otters can help Indiana DNR collect information by using the wildlife complaint form. This form allows DNR to track conflict reports for key species of interest. The form does not submit a permit application on your behalf to remove an animal, and it should not be used to submit sightings of river otters. DNR appreciates the support of Indiana residents in helping us collect better information about wildlife conflicts.

If you would like a permit to remove a river otter causing a conflict, you must complete the wildlife complaint form and then submit a nuisance wildlife control permit application before a permit will be issued.

A limited river otter trapping season was started in 2015 after otters had greatly expanded in Indiana. The season is highly regulated, with mandatory 24-hour reporting, tagging requirements, season bag limits, and a season quota. Learn more about the river otter trapping season. River otters are tracked through several surveys, including harvest monitoring and monitoring incidental captures, as well as the Paddlecraft Wildlife Index. Reports from various surveys and monitoring are available on the wildlife reports page .