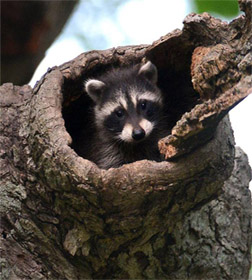 The raccoon (Procyon lotor) is a medium-sized mammal that is common throughout Indiana. Its black mask makes it easy to identify. Raccoons are found in both urban and rural areas and are a species that thrives around people. They are native only to North America. 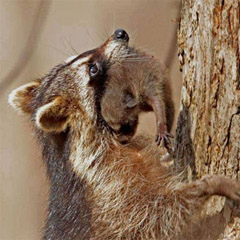 Raccoons occur statewide. They are most numerous where a mix of woodlands, cropland and shallow water are found. Northeastern Indiana, with its glacial lakes, is where the raccoon population is the greatest. The farmland of central Indiana is also home to many raccoons. The heavily forested south-central hills and northwestern prairie regions are less attractive to raccoons, but they are still common in these areas.

Most mating occurs in January or February. The male assumes no part in raising young. Most raccoons are born in tree cavities. If tree dens are not readily available, a female may use abandoned barn lofts, rock outcroppings, ground burrows or even attics and chimneys as dens.

Litters are usually born in April or May and range in size from one to nine, although the average is four. By mid-June, most young raccoons accompany their mother on food searches and begin to learn survival skills.

Raccoons are opportunists, eating both plants and animals. Some common food sources are:

Raccoons have very sensitive paws, making their sense of touch one of their most important for finding food. If water is nearby, the raccoon will appear to “wash” its food; however, the animal is actually kneading and tearing at the food, feeling for matter that shouldn’t be eaten. Wetting its paws enhances the raccoon’s touch. If water is not nearby, the raccoon will forego this ritual. Sometimes raccoons will appear to be “washing” food when really they are hunting for crayfish or mussels along the shores of creeks and ponds by feel.

Raccoons are most active at night, so often the best chance for viewing them is on an evening stroll or drive near their sources of food. Gardens, small streams, trash cans, sweetcorn fields, dumpsters, and birdfeeders are all choice food spots a raccoon might visit once the sun goes down. Eye shine, which is the light that bounces off the reflective membrane in nocturnal animal eyes, can help with identification but also vary by individual animal, how far you are from the animal, and the light source. Raccoon eye shine is typically bright yellow.

Raccoons will also visit key food sources during the day if they are worried about other animals finding the best food before them. Picnic areas and campgrounds can be a chance to catch a glimpse of a raccoon, like at Fort Harrison State Park or Glendale Fish & Wildlife Area. Remember—seeing a raccoon out during the day doesn’t necessarily mean the raccoon is sick. Never approach or feed wildlife, even if they are looking for a snack.

Resident landowners and tenants can trap a raccoon that is causing damage on their own property without a permit from the DNR. The raccoon must be euthanized or released within the county of capture on private property in which you have permission to release the raccoon. In order to prevent the spread of disease, the DNR encourages homeowners to safely and humanely euthanize the raccoons, if possible. If you do not want to trap the raccoon yourself, contact a licensed nuisance wild animal control operator.

Raccoons can often cause problems for landowners. Here are some tips for preventing raccoons around your home or garden: