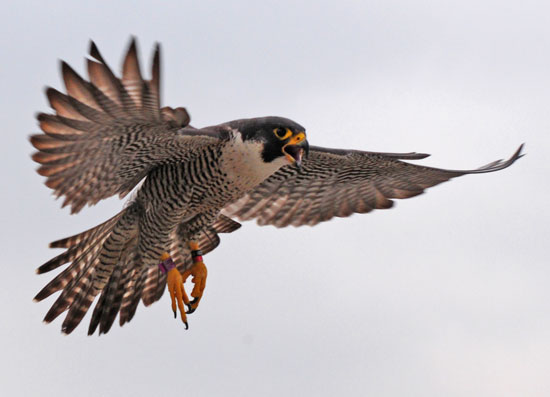 The peregrine falcon (Falco peregrinus) is a medium-sized hawk about the size of a crow. Once called “duck hawks,” adults have a distinctive dark hood and moustache, cream-colored throat, blue barring and yellow soft parts. In flight, the wings and tail are long and pointed, and the head is relatively large.

Immatures are brown in color with buffy feather edging, heavily streaked underparts, bluish-gray to greenish-yellow soft parts, and a less distinct hood and moustache. Adult birds are 15 to 20 inches tall, with females about one-fourth to one-third larger than males.

The average life span of a peregrine falcon is approximately 6-8 years, although some may live for 20 years. 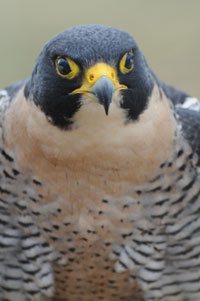 Historically, peregrine falcons nested along cliffs and river bluffs. Although these sites are still used today, peregrine falcons have found urban areas attractive for nesting. Large urban and industrial areas have an abundant prey base, a lack of great horned owls, and tall buildings which mimic cliff faces and offer relative solitude far above the streets.

During migration, peregrines can be found almost anywhere, but marshes are likely spots because peregrines are attracted by shorebirds and waterfowl. The southern tip of Lake Michigan is the best place in Indiana to find peregrines because they become concentrated along shorelines during the fall migration from September to November.

Peregrine falcons begin breeding at 2-3 years of age. They do not build nests. Usually, they create a scrape on the ledge of a cliff and the eggs are laid there. In urban areas, peregrines have nested on the ledges of buildings, under bridges and in recesses under raised roadways. If a nest box is provided on a building roof, peregrines may use it. Nest sites are generally reused every year.

One nesting attempt is made per year, although renesting may occur if the first attempt fails. The female typically lays three to four eggs and provides most of the incubation. The male brings food to her and also relieves her for short periods of time. Incubation takes 33 days. The young fledge, acquiring the feathers necessary for flight, at six weeks of age but do not gain full independence until they are 9-12 weeks of age. At this time they begin to move further out of their parents territory until their parents finally chase them away.

Peregrine falcons prefer medium-sized birds such as pigeons, starlings, grackles and shorebirds. Considered the fastest animal on earth, peregrine falcons surprise prey by diving at them at speeds up to 200 mph and capturing them in flight. Prey is snatched out of the air or knocked senseless, and the spinal cord is severed with a powerful bite to the neck.

Many people believe that peregrine falcons were reintroduced into urban settings as a means for controlling pigeon populations. This is a myth. Skyscrapers mimic cliffs, the natural habitat of peregrines, giving them additional nesting sites. Urban settings also provide abundant sources of food for the peregrines. Although they do eat pigeons, the peregrine falcons in Indianapolis are documented to eat more than 25 different bird species during nesting season alone. Highly territorial, there will only be a few nesting pairs in any urban setting. This small number of falcons would likely not impact the population of any prey bird species, including pigeons.

As a predator at the top of the food chain, peregrine falcons have few enemies besides man. The great horned owl, however, is a regular predator of young peregrines, and predation by owls has prevented the reestablishment of peregrines in many places away from urban areas. Peregrines commonly succumb to collision with vehicles and buildings. Also, pesticides continue to be picked up through their prey, primarily on wintering grounds in the tropics. 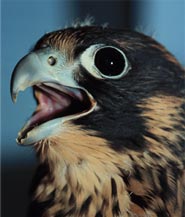 The peregrine falcon is a widely distributed raptor, or bird of prey, found on every continent except Antarctica. The name peregrine comes from a Latin word for “wanderer” and refers to its wide-ranging movements. Peregrine populations exhibited large-scale declines throughout the world in the mid-1900s primarily because pesticide contamination (mainly DDT) affected their ability to reproduce.

In 1970, peregrine falcons in North America were listed as endangered by the U.S. Fish and Wildlife Service. Due to a reduction in the use of DDT, reproductive success improved, and populations began increasing; however, the Eastern population had become extinct. During the 1970s, programs were begun to restore peregrine populations by releasing young captive-bred birds. These efforts have been successful, and peregrines are once again nesting in the East and Midwest.

In 1989, a single pair of peregrines nested successfully in East Chicago, the first known nesting in Indiana since 1900. Prior to that, peregrine falcons were considered rare migrants in Indiana. In August, 1999, the peregrine falcon was removed from the federal endangered species list. It continues to be protected under the federal Migratory Bird Treaty Act and is still listed as a species of special concern in Indiana. 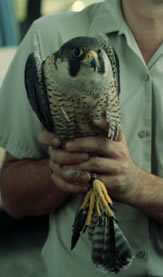 Habitat loss and decreased reproduction due to pesticides, such as DDT, caused drastic declines in the peregrine falcon population. By 1965, no peregrine falcons nested east of the Mississippi and western populations had declined by 90 percent. The Peregrine Fund was established by Cornell University in 1976 to study, breed and restore populations of peregrines to the United States. The first U.S. reintroduction projects began in 1974.

Through these efforts, it was discovered that urban settings are successful nesting areas as the skyscrapers mimic the peregrine's natural cliffside habitat. Indiana followed this example and began its peregrine falcon introduction project in 1991, releasing a total of sixty young falcons in Indianapolis, Fort Wayne, South Bend and Evansville through 1994.

Peregrines are known to be wanderers and there is no guarantee that a peregrine released or fledged in the state will nest here as an adult. Indiana's first peregrine nesting in recent times was in 1989 in East Chicago. Both adults were part of other states' reintroduction projects.

Peregrine falcon nesting is monitored every year and most young falcons are banded with leg identification tags to help monitor their movements and survival. The number of nesting pairs in the state has slowly increased. Nests are located on buildings, under bridges, and on smokestacks along the Lake Michigan shoreline and in urban areas like Indianapolis, Fort Wayne and South Bend.

Known peregrine falcon nests are monitored every year and the young are banded for identification. Efforts continue to identify likely nest sites and erect nest boxes in various parts of the state to encourage additional nesting by peregrine falcons.

Have you seen a peregrine falcon?

Peregrine falcons are rare in Indiana, and usually seen in large cities or wide-open areas like wetlands. They are easily confused with Cooper’s hawks, which also eat birds and are a common year-round resident of suburban neighborhoods. How to identify peregrine falcons.

New peregrine falcon nest locations and status updates to known nests are currently collected with the help of citizen scientists, who report nests to DNR biologists. Report active peregrine falcons nests and updates on breeding activity (e.g.  incubation, food deliveries, and begging chicks) to dfw@dnr.IN.gov. Please observe nests from a distance of 330 feet, which is roughly the length of a football field.

Peregrine falcon monitoring and research in Indiana is funded, in part, by citizen donations to the Indiana Nongame Wildlife Fund. To support this project and others like it, visit our donate page.