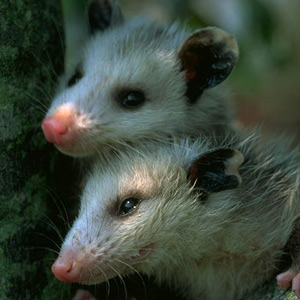 The Virginia opossum (Didelphis virginiana) is Indiana’s only native marsupial, meaning a mammal that raises its young in a pouch. Opossums spend a lot of time grooming and may eat a tick they find while cleaning their fur, but do not actively forage for ticks. Though many people think they look odd, opossums can provide a lot of benefits and are a unique member of Indiana’s wildlife community.

The breeding season for opossums begins in February. Young are born within two weeks after mating. Generally, 5 to 13 young are born and crawl into the female’s pouch to develop. After the first month, the young begin to leave the pouch for short periods, and once weaned spend about three months with their mother. Sometimes young can be seen clinging to the mother's back or tail as she wanders in search of food. Litters are not produced at any particular time but are born over a relatively long period from early spring into summer. Females can produce two litters per year. The final litter of the season may be traveling with the female when the first litter of the next year is born.

Opossums were once uncommon in northern portions of the United States. In the past half-century, opossums have extended their range and are now found in Canada. These animals occur in every Indiana county, but their numbers can be reduced in northern counties during severe winters. It is not uncommon to find individuals with tips of their ears and tails blunted from frostbite following a harsh winter.

Opossums are omnivores and will eat nearly anything, including:

Opossums are mostly active at night, so an evening drive will often reveal an opossum along the side of the road, especially if you drive slowly through forested areas. Eye shine, which is the light that bounces off the reflective membrane in nocturnal animal eyes, can help with identification, but it also varies by individual animal, how far you are from the animal, and the light source. Opossum eye shine is typically in the red or orange range and looking for their distinctive scaly tail will help you identify them as the dark closes in. They are often seen in neighborhoods, yards, and gardens, and will visit a birdfeeder overnight looking for dinner.

Opossums can also sometimes be seen near dusk on an evening walk around a neighborhood, hanging out under fruit trees when ripe fruit starts falling, or in mowed grassy areas looking for worms and grubs. They may even visit these spots in daylight to try to find the best food before another animal does. Visit places opossums might look for food around dusk at properties like Harmonie State Park or J.E. Roush Lake Fish & Wildlife Area to try to see this unique Indiana animal. 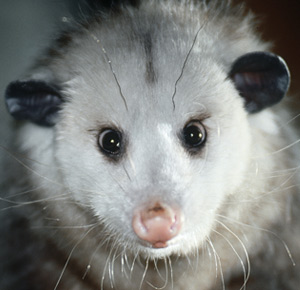 Opossums, because of their wide variety of eating habits, do not require special management techniques. There is a regulated hunting and trapping season for opossums. Dogs, coyotes, foxes, bobcats, and owls will prey upon them. However, their slow travel pattern across highways probably spells doom to more opossums than any other cause.

Resident landowners and tenants can live-trap an opossum that is causing damage on their own property without a permit from the DNR. The opossum must be euthanized or released within the county of capture on private property for which you have permission to release the opossum. In order to prevent the spread of disease, the DNR encourages homeowners to safely and humanely euthanize caught opossums, if possible. If you do not want to trap the opossum yourself, contact a licensed nuisance wild animal control operator.

If you have an opossum hanging around you want to discourage, consider the following: