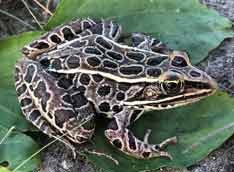 During the latter half of the 20th century, Northern leopard frogs experienced considerable declines in several parts of their range, including Indiana. In 1984, it was listed as a Species of Special Concern. However, the frogs have responded well to habitat restoration and are now relatively common in the northern part of the state. As such, in 2017, the Indiana Department of Natural Resources Amphibian and Reptile Technical Advisory Committee voted unanimously to delist Northern leopard frogs. In 2018, they were formally removed from the list.

2-3” (5.1-9cm). Dark spots on back with white margins. Spots mostly larger than eye. Dark spot on snout, no spot on external eardrum. Green, tan, or brown with a white belly. Dorsolateral ridge extends to groin. Slender with a narrow head.

Deep rattling snore that lasts 2-3 seconds, followed by a chuckling sound, like a heavy creaking door slowly opening. Also sounds like two balloons being rubbed together. Difficult to distinguish from southern leopard frog unless heard on the same night. 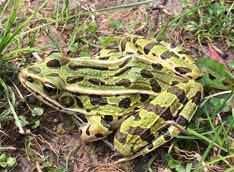 Females may deposit 3,000-5,000 eggs in globular clusters. Usually laid in shallow water and attached to submerged vegetation a few inches below the surface of the water. Hatch in 1-2 weeks.