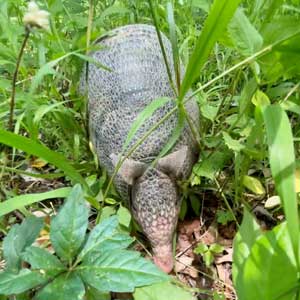 The nine-banded armadillo (Dasypus novemcinctus) is the only armadillo species found in the United States. Armadillo translates to “little armored one” in Spanish, and describes the bony, armor-like skin that covers most of their body. This species is unique in appearance and behavior compared to most mammals which makes identification easy. Nine-banded armadillo is a powerful digger and can quickly excavate burrows to seek shelter from predators or weather. The network of burrows left by armadillos are then used by other species, such as rodents, reptiles, amphibians, and sometimes birds.

In the early 2000s, reports of armadillo sightings on Indiana’s roadways were first noted in southwestern Indiana. Recent observations of live and roadkill armadillos indicate this species can be found   year-round across the southern half of the State. Reports of armadillo have been received as far north as Porter County.

The nine-banded armadillo is not the first armadillo species to occur in Indiana.  Do you know which species of armadillo occurred here in the past? Answer at bottom of page.

Armadillos are typically solitary, though males will begin following females at the start of the mating season in early summer. Males likely mate with multiple females if conditions allow. After 3-4 months, the fertilized egg will implant in a females’ uterus where it will divide into 4 identical embryos. These embryos then develop for another 4 months before the quadruplets are born in the spring.

Young armadillos are highly developed when they are born and resemble the adults in all but size. The young will forage around their den for the first six months before dispersing in search of resources. Young armadillos will become sexually mature around one year of age, and they will reach adult size by about their third year. Females can potentially reproduce for the duration of their lifetime, which is about 12-15 years in the wild.

Armadillos are primarily insectivores, meaning they will eat insects, insect larvae, and other invertebrates. They use their heightened sense of smell, sharp claws, and a long tongue to search for prey. Their primary food items include:

Armadillos will occasionally eat vertebrates and plants including:

Please submit armadillo observations on the Report A Mammal form. When possible, submit observations with photographic evidence to help our biologists identify the age and sex of the animal. Live armadillos will be more difficult to determine the sex compared to roadkill individuals, but these reports are very valuable too.

Since this species has naturally expanded into Indiana it is important to gather information of sightings to better understand their distribution and movements. These observations can also help us monitor interactions between nine-banded armadillos and other species found in Indiana.

The nine-banded armadillo occurs in South America, Central America, and North America in forested and riparian habitats. They were documented in Texas by the mid-1800s, then in Florida by the early-1900s, and they continued to expand northward. The nine-banded armadillo expansion will be slowed and eventually stopped as they encounter winters with extended periods of sub-freezing temperatures. Because of many factors (sparse fur, limited body fat, and generally low body temperature) armadillos are highly susceptible to hypothermia or starvation during winter months at this northern extent of their range. Armadillos can survive periods of extreme cold by remaining in their burrows.

Since the early 2000s Indiana DNR has received over 74 reports of armadillos, and the frequency of reports has increased in the past five years; nearly 80% of armadillo reports were received from 2017-2021. The spatial trend in these reports suggest that armadillos occur regularly in southwestern Indiana, where habitats provide a great mix of deciduous forest and riparian areas. However, additional time and reports are needed to better assess the abundance and distribution of armadillo within Indiana. 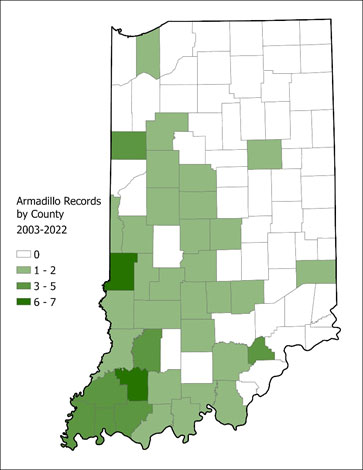 At this time evidence does not suggest that an expanding armadillo population will negatively impact Indiana’s wildlife populations. Data collected through armadillo reports will aid biologists in assessing what impacts armadillos have on other wildlife found here in the Hoosier State. It is likely that armadillos will compete for food resources with other insectivores feeding at or below ground level; this includes shrews, moles, skunks, opossums, and a few other vertebrates. Additionally, there are no active management plans for this species. Continued analysis of reports may lead to future management decisions to help ease nuisance conflicts.

Residents may discover armadillo digging activities to be a nuisance. Since armadillos can burrow, fencing or barriers that are slanted at an angle with one portion buried underground may help exclude them. If armadillos have created burrows under structures, you can illuminate the burrow, or place a radio near the entrance to help drive them away. Fumigants, poisons, or traps are not advised for armadillo control.

Nine-banded armadillos are protected under Indiana Administrative Code (312 IAC 9-3-18.5) and they cannot be trapped or killed unless the armadillo is destroying or causing substantial damage to property. If property damage is occurring, resident landowners and tenants can remove the armadillo without a permit or contact a permitted wildlife control operator.

The nine-banded armadillo is not the first armadillo species to occur in Indiana.  Do you know which species of armadillo occurred here in the past?

Though the appearance of the nine-banded armadillo in Indiana is exciting, it is not the first armadillo species to make it this far north. That distinction goes to the much larger cousin of the nine-banded armadillo, the Beautiful Armadillo (Dasypus bellus; also known as the Giant Armadillo) which occurred in Indiana between 40,000 and 11,500 years ago. Pleistocene-aged remains of this species have been recovered from multiple caves and riverbeds in central Indiana.

The beautiful armadillo was big compared to their living relatives. They weighed between 30-44 pounds and reached nearly 4 feet in length! This species went extinct approximately 11,000 years ago.