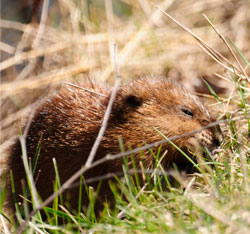 Muskrats (Ondatra zibethicus) are large, semi-aquatic rodents that spend most of their time in water. The resemble beavers but are more closely related to mice and rats. Muskrats get their common name from a strong smell or “musk” that they produce during mating season and to mark territories. 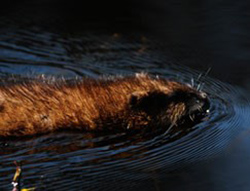 Muskrats occur throughout Indiana but are most numerous in areas of abundant shallow water. Historically a stream and wetland species, muskrats may also utilize retention ponds, farm ponds, and drainage ditches.

Muskrats may live in “bank dens,” which are nest chambers above water level in burrows entered from the water, or, in some wetlands, they may use cattails and other aquatic plants to build houses resembling small haystacks.

Courtship is conducted by the female as she swims about making noises similar to the squeak of a mouse. Two or four litters may be produced each year, but most muskrats in Indiana have at least one litter in May and June, 28 to 30 days after mating. Litters average six young, but can range from three to 10. Young are usually born in a shredded cattail or grass nest. Kits are naked, blind and helpless at birth, but grow quickly and are weaned at 4 weeks old. At this time, they can swim but do not dive well. If the mother is to have another litter soon, they are driven from the house or burrow, but the last litter of the season may spend winter with its parents. Muskrats are tolerant of each other, and except during the breeding season, several may live together.

Many muskrats spend their entire lives within a few hundred yards of their birthplace, but in autumn and spring, some are forced to migrate to less-crowded areas and may wander several miles to establish new home

Food is not stored for winter, so they must dig roots and tubers from beneath the ice, returning to their house and burrow to feed. If food sources are too far from the house, a feeding shelter called a “push-up” is built on the ice. This consists of a hole in the ice over which the muskrat drags aquatic vegetation, which freezes and forms a dome enclosure that protect muskrats while eating. Similarly, in summer a feeding platform—a raft consisting of discarded plant food—may be constructed.

Resident landowners and tenants can trap or shoot a muskrat that is causing damage on their property without a permit during the closed season. In order to prevent the spread of disease, the DNR encourages homeowners to safely and humanely euthanize trapped muskrats. If you do not want to trap the muskrat yourself, contact a licensed nuisance wild animal control operator.

Muskrats can sometimes be prevented from digging in a pond dam or bank by rip-rapping. Drawing the pond down at least 2 feet below normal water levels during the winter can also encourage them to leave. Once it is drawn-down, you can trap or shoot (where legal) the muskrat, then fill the dens, burrows and runs and rip-rap the dam with stone to prevent muskrats from re-colonizing. A concentrated effort to reduce the breeding population of muskrats during winter through regulated trapping can also help reduce damage in spring and summer.

Muskrats are an important source of food for a variety of species, including mink, hawks, owls, river otters, coyotes, foxes, and bobcats. Domestic dogs will also kill muskrats, though the muskrat’s sharp teeth may inflict some damage first, so keeping dogs leashed and supervised is important.