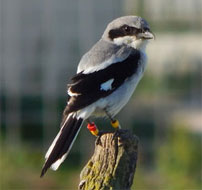 The loggerhead shrike is a songbird slightly smaller than a robin. Its striking appearance includes a broad black mask through the eyes, gray back and breast, a white spot on black wings, and white edges on a black tail. Despite its small robin-like stature, the habits of a shrike reflect those of a raptor.

Loggerhead shrikes have strong, hooked bills that allow them to take prey items large for their size. Even though they lack the strong talons of a raptor to hold down and manipulate prey, they compensate by anchoring their prey from thorns or barbed wire to tear prey into bite-sized pieces. Prey hung up in this way can also be conveniently stored for later. This behavior has earned them the nickname of “butcher bird.”

Shrikes have a diverse diet that includes beetles, grasshoppers, wasps, spiders, mice, voles, house sparrows, snakes and frogs. They often hunt from perches, scanning the ground from a utility wire, post, fence or plant stalk, and pouncing on prey spied below.

Loggerhead shrikes are found in grasslands, shrublands, grazed pastures and agricultural areas. In Indiana, shrikes are most frequently found on traditional farms with livestock pasture and smaller fields with a variety of crops bordered by shrubby hedgerows and fence lines.

Nests are substantial structures made of small twigs and grass, lined with horse hair or wool, and placed in a shrub or small tree. Eastern red cedars and rose bushes are favorite nesting sites in Indiana, especially when the bush is isolated within a fencerow. Shrikes will sometimes nest twice in one season, especially if the first nest fails.

Loggerhead shrikes have been undergoing alarming population declines in the eastern United States and are a state-endangered bird in Indiana and many other states. Reasons for this decline are puzzling and likely include a combination of factors: 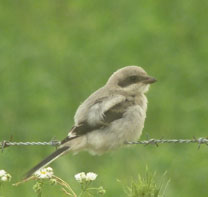 Loggerhead shrikes were included on Indiana’s state-endangered list when it was first developed in 1981, and they remain there today. In 1999-2000, the DNR Division of Fish & Wildlife (DFW) biologists did extensive surveying for shrikes and found them in 58 locations. In the years since these studies were done, shrikes have shown a dramatic decline. Since 2010, DFW biologists conducting annual surveys have found three to eight nesting territories each year in the entire state.

Landowners can help shrikes and other wildlife by preserving their fencerows and the shrubs that grow along them. Since shrikes typically build their nests in isolated bushes and trees along a fencerow, allowing several large isolated bushes is a great way to increase nesting habitat for this unique species. If fencerows need to be cleared, it is best to wait until after the nesting season  to give baby birds a chance to survive. Nesting season occurs from early March to late August. Besides shrikes, many other native birds choose to build their nests in fencerows, and food and cover is provided for species like dove, rabbits, and bobwhite quail. Farms with healthy fencerows have a greater diversity of native wildlife than those without, and many of these native species are beneficial for insect and pest control.

Wildlife biologists within the DFW monitor the status, distribution, and relative abundance of the loggerhead shrike population through periodic surveys and color banding individual birds. These efforts might help explain some of the factors responsible for the decline. 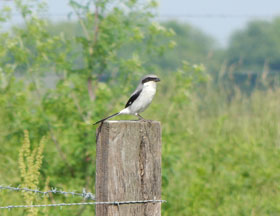 Include the date, location of sighting, description of and number of birds observed, and any breeding evidence noted.

Loggerhead shrike monitoring in Indiana is funded, in part, by citizen donations to the Indiana Nongame Wildlife Fund. To support this project and others like it, visit our donate page.